The Home Guard on the World War Two home front

Formation of the Home Guard

During the World War Two every able-bodied adult was under pressure to do something to help the war effort and almost all of them were only too keen to do so.

In particular, in response to an urgent broadcast on Tuesday 14 May 1940, men who for various reasons could not join the regular army volunteered to join groups which were then known as Local Defence Volunteers. The Government expected 150,000 men to volunteer but within 24 hours 250,000 had put down their names. By the end of May the number had risen to between 300,000 and 400,000 and by the end of June to just under 1½ million. The number peaked at 1.8 million in March 1943 and never fell below 1 million until the Home Guard was disbanded after the war. In practice, though, home guards would turn their hands to anything necessary to help the war effort.

Only two months after their formation, at the end of July 1940 the name Civil Defence Volunteers was changed to The Home Guard.

As soon as it could be arranged, members of the Home Guard were issued with their own uniform and kit.

The role of the home guard

The role of the home guard was specifically defence. The original remit was to defend the British coastline in the event of an invasion by Germany, although this was expanded to watch over secure establishments like air-fields and factories inland.

This role was different from that of ARP wardens.

Who the Home Guardsmen were

The Home Guard drew its membership from several sources: men who were too old for the regular army, men in reserved occupations and young men of 17 to 18. 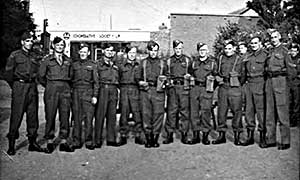 4th Rumney Company, Cardiff Regiment, South Wales Home Guard, summer 1943. This group was colloquially known as the Butchers Platoon because most of them were butchers by profession, a reserved occupation. Photo courtesy of Malcolm Head.

The older men had generally served in WW1 and they headed the training with occasional support from the regular army. Indeed once the 17 year-olds became 18 and were called up into the regular army, they had already been well-prepared by being in the Home Guard. Newly 17 year-olds joined and so kept up numbers.

At first the only 'uniform' for the want of a better word was an armband marked first with LDV for Local Defence Volunteer and then Home Guard for the newly named platoons. As stocks were produced, priorities went to the platoons around the coast as they were the first line of defence. Eventually all Home Guards were given full uniform. 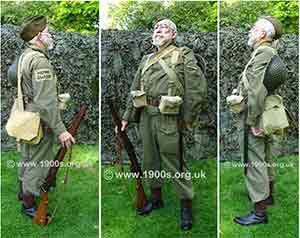 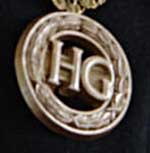 The Home Guard uniform was modelled on that of regular soldiers. The above photos show a genuine uniform (not a re-enactment version) at a re-enactment event. The fabric of the trousers, jacket and cap was a hard-wearing khaki coloured serge. The trousers were tucked inside leather gaiters for protection; there was a leather belt and pockets and ties for various purposes. The badge in the cap was that of the regiment and a Home Guard badge was sewn onto the right sleeve.

There was also an overcoat, known in those days as a 'great coat'. It could often be seen on men after the war, long after the Home Guard had been disbanded because Churchill decreed that Home Guardsman could be keep their uniforms. These coats were heavy because they were so thick and made of relatively solid wool. Light-weight padded coats of man-made fabrics were decades into the future.

Some platoons were supported in an administrative capacity by women from what was known as the Women's Home Guard Auxiliaries. However these women did not wear a uniform, although they did have a circular Bakelite brooch badge about 2" in diameter with HG in the centre.

The full kit of a Home Guardsman was considerable, as can be seen from the pictures, and it was very heavy.

The rifle was carried in the hand and a bayonet was hung from the belt.

Gun as used by Home Guards

There were two small bags at the front, attached to shoulder straps; they were for ammunition.

Two larger bags were carried over each shoulder. One was for food. A Home Guardsman was required to bring his own food for the first 24 hours when away on manoeuvres and this was invariably sandwiches with perhaps an apple when in season.

Bayonet as used by Home Guards

A water bottle hung from the belt on the man's right. It was made of enamel in a thick fabric case which, at the time of filling was soaked in water to keep the contents cool by evaporation.

The other bag was for a gas mask which it was compulsory to carry.

Also slung over a shoulder was a hard hat to protect against fallout. It was covered in net so that twigs and leaves could be poked through for camouflage.

The regular duties of the Home Guard

Because the role of the home guard was defence, they had to become proficient in military matters such as use of weapons, fighting tactics and support of regular soldiers.

Each group of Guardsmen was allocated its own location so that as soon as the need arose every man knew where he had to go and what he had to do.

Training and exercises in the home guard

Initially training took place almost every evening and at weekends, and many weekends were entirely taken up by exercises - sometimes with other Home Guard units, sometimes with members of the regular army.

What my father did as a home guard

My father's group helped to man the searchlights which were set up in a local market garden. The Guardsmen also set up road blocks at regular intervals - not a popular exercise as it involved moving several 50 gallon oil drums full of concrete to form a chicane. Only once did anyone try to burst through this arrangement, with dire results. The driver claimed not to have seen the obstruction in the dark (Vehicle headlights were hooded and visibility very poor.) The fact that he was found to have half an illegally slaughtered cow in the back of his van was coincidental apparently.


Where the Home Guard met

Individual local platoons of Home Guard met wherever there was space to accommodate them. Typically this was in church halls and back rooms of pubs.

Camaraderie in the Home Guard

The officer in charge of my father's group was our neighbour and friend, and it was a great source of amusement that my father would make a great play of saluting him at the most inappropriate moments.

As the war progressed and the threat of invasion receded, life in the Home Guard became more relaxed and on weekend manoeuvres cross country exercises would often end at my grandfather's pub, the Cefn Mably Arms. Pubs in Wales were closed on Sundays then, so the men remained undisturbed, especially as Sgt Evans of the St Mellons (local) constabulary was among them.

Page based on discussions with Home Guard enthusiasts at re-enactment events, descendants of Home Guardsmen and additional research by the webmaster.