I as born five months before the Second World War started. So I was provided with a gas mask against a possible German gas attack on civilians. 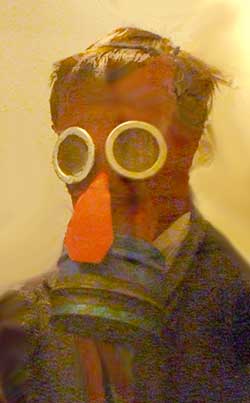 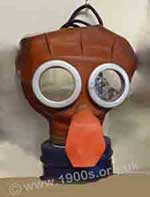 Like all children's gas masks, mine was supposed to look like Mickey Mouse, to appeal to children - although when I look at these gas masks in museums, the resemblance to Mickey Mouse leaves much to the imagination. Cynthia Chadwick's comment reminiscent of monsters - see below - seems far more fitting.

The Mickey Mouse's nose was supposed to flutter to show that the child wearing it was breathing. In the following box Stan Clark's explains how it worked.

The Mickey Mouse mask had a nose piece that stuck out from the front. It was rounded where it was attached to the mask and the other end flattened and thinned out, acting as a one-way valve for breathing out.

Clearly children managed to breathe through this arrangement, but I have a clear memory from about three years of age of adamantly refusing to wear the thing, after being made to try it. I instantly tore it off because it was stifling me. I couldn't get any breath through it! Whether this was a fault on my mask or a problem with the strength of my young lungs, I shall never know. In fact my mother did not persist and fortunately the Germans never used gas on us..

Practice breathing through a gas mask at school

Sometimes we were made to wear our gas masks during lessons at school. Then, when we had to recite the times tables from off the black board, the lenses would steam up from our breath so that we couldn’t see a thing. We learnt that a cut potato, rubbed over the inside lenses helped to stop them steaming up.

We girls were offered attractive girly canvas bags. I chose one with pink rabbits on, and I still have it all these years later.

As far as I know, my mother was not offered such a bag for me, but I was a few years younger and lived in a different area.

I saw the older boys using their canvas shoulder bags for all sorts of things, so I did the same, with the gas masks lodged on the tops of our heads. We could fill up our boxes with hips from off the hedgerows, for which we would be paid 3 old pence a pound at every assemble in school.(Interesting that another contributor to this website was only paid 2 old pence a pound!)

I also kept my catapult and a few stones in my bag, and I went scrumping filling it with apples, or conkers. I manage to get through or destroy at least three boxes a week until getting the cane at school made it too painful to contunue. I did eventually start to look after my bag a bit better.

A lot of the girls at school covered their canvas bags with fancy wallpaper, and kept girly things in them. I suppose to a girl it was like having a hand bag.

Difficulty of keeping young children's gas mask at the ready

Mothers and teachers were supposed to make sure that these bags, with the gas masks inside, were always within reach, at home, out of doors, at school and in bed at night.

Yet, as far as I can remember, my gas mask never went anywhere with me even though we lived in London in the midst of the blitz. Because I was so young, my memories are of the latter part of the war, and it is quite possible that my mother did keep me and my gas mask together earlier on with the canvas bag on show.

If you breathed hard while wearing one of these Mickey Mouse gas masks, you could make very rude noises. By altering my breathing, I could even play tunes on mine.

Towards the end of the war once the threat of gas had receded, we played 'monsters' in the street with our gas masks. Then they were recalled and we had to hand them over - for the rubber or what, I don't know. 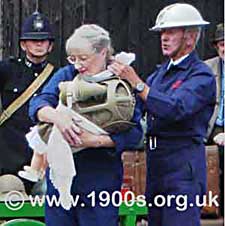 Because there never was a gas attack in Britain in World War Two, I never saw a baby wearing a gas mask. What I know comes from what I have been told by older people and seen in museums and shows.

Babies' gas masks had to be contin­uously pumped by hand by someone to keep the air flowing for the baby. I suppose that the baby's breath had to keep in phase with the pumping, as I can't believe that a baby could possibly have breathed alone through the filter. The pumping must have been extremely stressful for whoever doing it.

Babies' gas masks are best described through pictures, all photographed on my various visits.

The first of the following photographs is the clearest for showing how the mask works because it shows the pump tube. Unfortunately none of the photos show the pump itself. Tap/click it for a larger version. 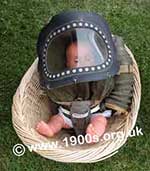