Snuff, as used in the past

I have read about people taking snuff and seen it in period films, but I never saw anyone using it is real life. I suppose it was going out of fashion by the time I was born in 1939, and perhaps the austerity during the Second World War had something to do with it - or maybe it was a private activity among older men.

How snuff was sold

However, snuff was still sold in tobacconists shops when I was growing up in the 1940s and 50s. It looked to me like finely ground tobacco. It was either sold in special small tins or and specially weighed out for each customer and packaged in twirls of paper with the maker's name printed on, like in the photo. 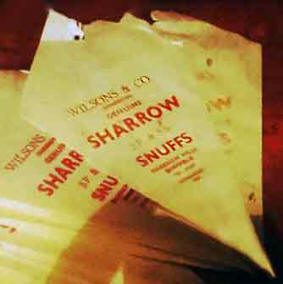 How snuff was sold, photographed in Winchester City Museum

How snuff was kept at home

I understand that the snuff was transferred at home into a dedicated relatively air-tight snuff box. These could be quite elegant and the design and quality of their materials was an accessory that said something about their owners, as did cigarette cases for cigarette smokers.

How snuff was used

I used to hear people talk about 'a pinch of snuff', and I understood that pinching it lifted a tiny amount  which was held under the nose and inhaled. This was supposed to clear the nasal passages. Whether or not it gave the same feelings of relaxation as cigarettes, I don't know.