Common accessories for smokers in times gone by

I was in my teens in the 1950s when I made the observations described on this page. They reflected the fact that the austerity following the Second World War was coming to an end. We all wanted to appear grown-up, so we toyed with smoking cigarettes and havng the current fashion accessories. These included smoking accessories.

Incidentally I shortly gave up smoking and am as healthy as can be expected for my age. My university room-mate did not give it up and has to take oxygen with her wherever she goes. It is even built in to every room in her home via tubing.

What I remember most about our smoking accesssories was the cigarette lighters. At that time, cheap ones were coming in from Japan and were quite decorative. I had one faced with bright red leather that I particularly liked.

Decorative women's cigarette lighters, made in Japan, common in the 1950s and 1960s

The lighters worked by lighting petrol from a flint which made a spark when a lever was pressed rapidly. Lighters needed to be refilled with petrol once the petrol ran out. This petrol came in tiny capsules from tobacconists.

My father's cigarette lighter came from before the war and was silver with his initials engraved on it.

My father had a solid silver cigarette case that matched his lighter. This was from before the war. Most men had similar-looking ones, although they may not all have been silver.

Although the photo seems to show just a plain box - albeit with elastic stays to hold the cigarettes - my father's cigarette case was specially curved to fit snugly in a man's breast pocket against his chest. 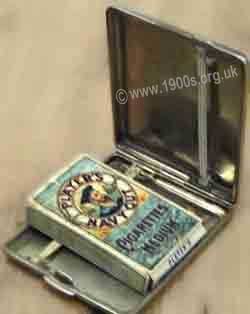 A common cigarette case. The elastic held the loose cigarettes in place.