The arrival of the wounded soldiers

We children were always excited when a convoy of wounded soldiers was expected. They had been brought back to England by ship, then by train to a London Station where ambulances met the convoys. My father was one of the ambulance drivers. 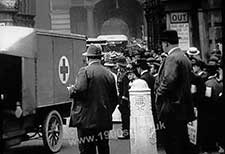 The ambulances moved only at a slow walking pace to try to prevent unnecessary jarring, as many of the solders were extremely badly wounded. When we children saw them coming along Silver Street, we would run along beside them and cheer.

The public were also quick to care for the new arrivals when necessary as clear from the recollection in the following box.

Everyone rallies round the new arrivals

"On Monday a train load of wounded men arrived at Swindon [presumably another hospital]. Being a Bank Holiday food was a difficulty, especially bread. However Stephens the baker got to work and got his ovens going, but we had to GIVE the bread as it is illegal to SELL bread till it is twelve hours old."

from a WW1 letter in 'Charlotte's Beastly War' by James Melik, reproduced with permission

There were several hospitals in England given over to the care of wounded soldiers during the First World War. They were similar in how they were run except that each had its own specialisation. I knew Edmonton Military Hospital as it was close to where I lived. It was a special surgical hospital for orthopaedic cases.

The Military Hospital was a great centre of interest to local people with its two large red crosses on the front gates.

Tap/click for a larger image and note the cross on the left hand gate.

The Military Hospital in Edmonton must have been fairly typical of other military hospitals in England. It was in Silver Street, Edmonton and is now the North Middlesex Hospital. My father's uncle, E. G. Cole, was very much involved in setting up the hospital for military use, for which he was awarded an MBE.

There seem to have been several large buildings within the hospital site because, although all the photos on this page were taken and labelled either during WW1 or shortly afterwards, they do not appear to show the same building.

The front of Edmonton Military Hospital, from inside the main gate**

The back of Edmonton Military Hospital*

The annex at Edmonton Military Hospital******


The wards and the nurses

The following photo is an example of the wards and the nurses. It opens on tap/click to show the size and nature of a typical ward, its bed and the nurses. There more photos of the nurses and their uniforms below. As they will show, the nurses took part in the social life of the men, and look happy to do it.

The hospital uniforms for the recovering soldiers

When the men were well enough to get out of bed, they were given hospital uniforms.

When the wounded soldiers were well enough to go out, they were very noticeable in the street as they were dressed in sax blue suits made of what looked like a type of lightweight flannel material, and they wore bright red ties.

It seems that all the country's main military hospitals had the same uniform, as shown by the photo of Caenshill Military Hospital.

Uniform of the wounded soldiers***. 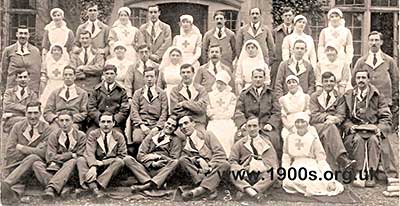 Entertainment and social life for the recovering men

I have collected a number of photos of nurses joining in with the social life of the recuperating men. The following photographs show the uniforms of the various grades of nurse, as well as the suits worn by those patients who were well enough get dressed. 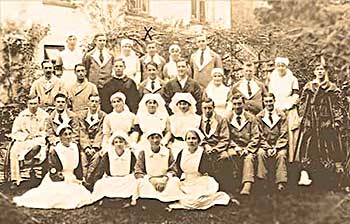 Wounded soldiers and nurses of Edmonton Military Hospital as guests at a wedding party in a nearby house, 1918***** . 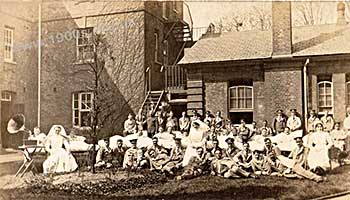 Soldiers relaxing in the hospital garden. Note the old wind-up gramophone on the far left with its speaker horn**. 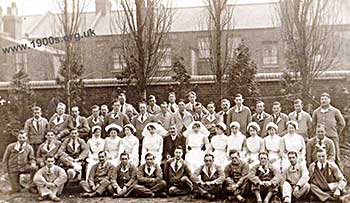 A group of soldiers in the hospital garden** The man in the centre, out of uniform, was probably a doctor. 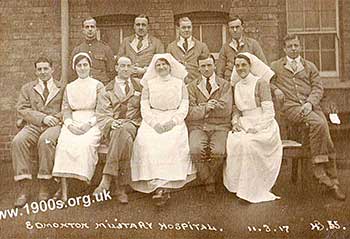 A select group of soldiers and nurses. The date is shown as 11th March 1917**

A group of recuperating soldiers and nurses at Edmonton Military Hospital, 1918******

Support for the wounded soldiers

Naturally everyone was very kind to the wounded soldiers. America sent tins of tobacco which were very attractive. They were about three inches long and curved to fit comfortably into a breast pocket. The name on the tin was Tuxedo and there was a picture of a man in a dinner jacket. The Americans also sent grapefruit, and my father had some, presumably a perk of the job. We had never seen them before and tried to eat them like oranges. So we didn't like them at all because they were so bitter.

When the war was over, the hospital had a Peace Tea, and, as my father was on the staff, my mother and I were invited too. There was food galore and it was the first time I had trifle with sherry in it. 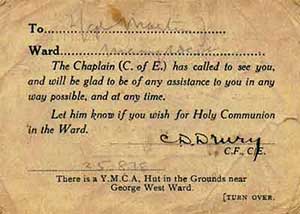 Visiting card of the hospital chaplain, C.D. Drury, dated 25 August 1915*** The recipient's name "Martin, J" is handwritten in the 'To' space. 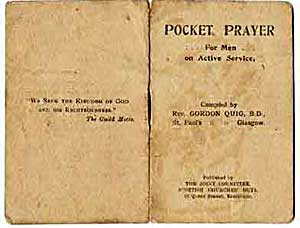 The hospitals did a great job of car, but the available medical technology was much less advanced than today.

What sticks in my mind from my 1930s childhood is the number of ex-servicemen from the First World War begging in the streets or playing musical instruments for donations. All had limbs missing or loss of sight.