I was too young to understand much about how Britain fought back during World War Two air raids. The following recollections come from people just a few years older than me.

Many of the following recollections use the terms 'gun battery', 'anti-aircraft gun' and 'ack ack' which may be new to anyone born after World War Two. At the time, they were in everyday speech. However, there seems to be no definitive definition of 'gun battery' on the internet. As far as I can make out, a World War Two British gun battery was a military grouping armed with one or more large guns capable of repeat shooting at German aircraft. The guns were known as 'anti-aircraft guns'. Because they were repeat shooting, they made a noise sounding like 'ack ack', so were often known in conversation as 'ack acks'. 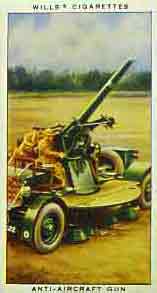 Anti-aircraft-gun from a cigarette card

Anti-aircraft-gun - detail from a larger photo

Judging by the numbers of mentions of gun batteries and anti-aircraft guns among the contributors to this website, they were by no means uncommon across areas which anticipated air raids. I gained the impression - rightly or wrongly - that these were generally small local ones with only one or two guns. Frank Clarke, though, states below that they tended to be larger.

I understand that the anti-aircraft guns of the time were not very effective. They were, after all, trying to his a moving target at a distance. Apparently, though, they gave the civilians on the ground some sense of security.

A battery of guns, usually 6-12 was very mobile and could be rushed to various places when needed. The could point high into the sky.


Where gun batteries were located

The gun battery that I knew was on a hill, and I believe that this was fairly general if the lie of the land permitted. It made sense as it meant that the operators had a wider field of view


Shells and flak from anti-aircraft guns

Ant-aircraft guns generally handled approximately 3 inch shells which were guided by a crude sonic direction and optical range finder. A shell could be fused to explode at a certain height just before firing. Then the casing split into hundreds of pieces called shrapnel, potentially dangerous to planes and airmen. The aircraft on the receiving end called it flak.

What WW2 shrapnel was

Contrary to what many a schoolboy thought, the shrapnel that they collected was not from enemy aircraft shot down, but from British and German exploded shells that hadn't found their target.

During the blitz, there was an Ack Ack gun battery near us and most nights when they fired, it was more scary than the bombing. A great source of shrapnel for the kids but too dangerous to be out there during a raid.

One of the ways of passing time in our so-called 'shelter' was to count the number of bangs created by the gun firing from a gun battery about 500 yards from us.


A thrill for child at a gun battery site

Around 1943 I was taken to see the gun in the gun battery near us. I was totally thrilled to be invited to sit on the gunner's chair and pretend to fire it.