The power of public road transport in the early 20th Century 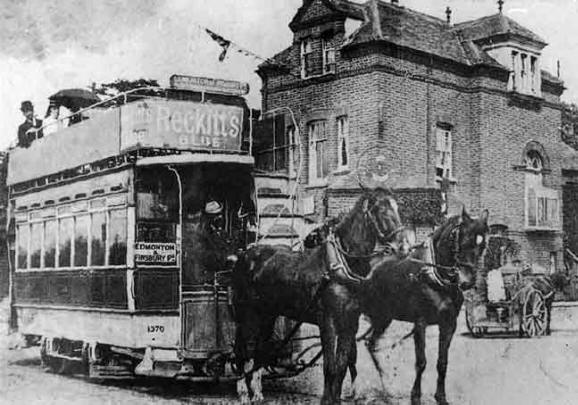 Horse-drawn tram in Edmonton, c 1900. Note the rails in the road and the open top. Photo from the effects of Ena Cole.

Trams ran on rails which had tracks set into the roads. Consequently they were not at all manoeuvrable: The driver couldn't steer and other road users had to keep a constant look-out to get out of their way.

Trams were particularly hazardous for cyclists because their wheels could easily get caught in the channels on either side of the rails unless the cyclists made a point of riding across them rather than along them. Fortunately, as it was expensive to lay the tracks, trams ran on relatively few routes.

Trams, like buses, had open tops when I was a child. On the old buses page there is a photo of the flaps on the backs of the seats in front that could be pulled over knees when it rained.

My Aunt Em was one of the many women who was drafted in to work on the trams during World War One, when so many men were away fighting (or dead or injured). She often let us children have a free ride. 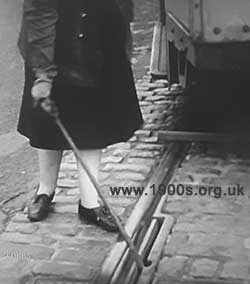 The horses who pulled the trams

The tram in the above image belonged to the then North Metropolitan Tramways. This company later became part of Metropolitan Electric Tramways and the former horse tram routes were electrified before becoming part of London Transport at the latter's formation in 1933. With the exception of three tram routes using the Kingsway Subway, all of North London's trams had gone by WWII and were replaced in the main by trolleybuses. London's remaining trams finally bowed out in July 1952, leaving London tram-less until the modern Croydon-based system appeared. During the last week of London's trams, many cars (as trams were called by staff) carried the announcement "Last tram week. On July 5th we say goodbye to London".