What it was like to travel in old steam trains

An outing by train to the seaside in the early 1900s

Although my family couldn't afford a family holiday away, we children did have our annual one-day outings by train to Southend-on-sea, run by the Sunday School, and these were as good as far as we were concerned. Off my brothers and I would go, carrying our packets of sandwiches, full of excitement, to meet our friends.

Going on a train was part of the treat, as we hardly ever travelled long distances, and it was all the better because we were with our friends. 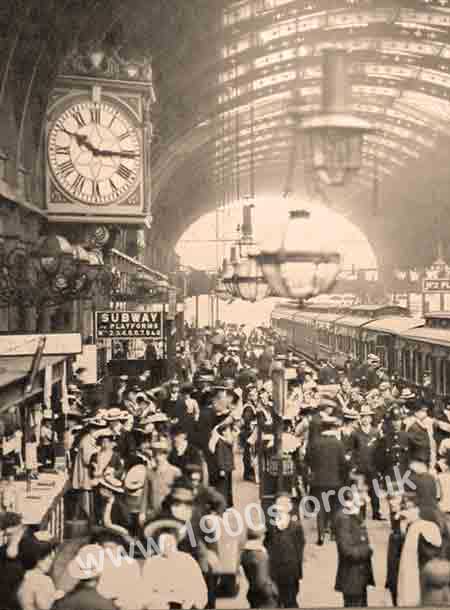 A busy train station in the early 1900s. An enhanced detail of a photo in the Steam Museum at Swindon.

At the big London station, it was lovely to look around, and see the trains arriving, looking so majestic and important, then letting off their steam with a deafening blast.

Platform 1 at Paddington with its famous clock c1920

The photograph shows Platform 1 at Paddington with its famous clock. This clock was installed in 1903 and survives to this day, albeit long ago converted to electricity. The train on the right and the clothing styles of the passengers suggest the picture was taken around 1920 and almost certainly no later. Close examination shows some GWR staff in the uniforms of the time and at least one policeman. The style of hat worn by many of the men shouts 'public school', so the train may have arrived from Windsor (the station for Eton). 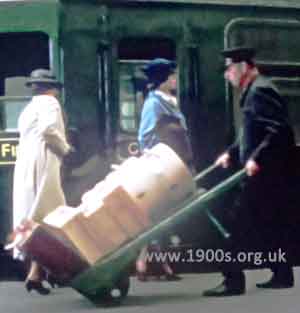 When a train came to a standstill, porters were always at the ready, in the expectation of a tip, to carry passengers' baggage. They had two wheel trucks for several cases and four wheel trolleys for heavy luggage.

The train drivers and the firemen

The drivers and fireman would climb out of their cabins, wiping their brows to cool themselves off from the heat of the coal fires that they had kept burning all journey-long by shovelling in more and more coal to feed the monster engine. 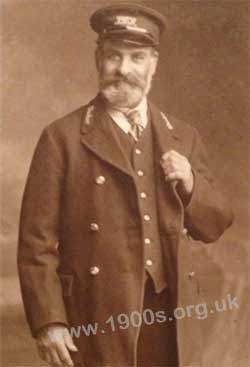 Occasionally we would see the station master. He looked very grand and important in his dark suit, peaked hat and matching waistcoat with gold buttons and braid.

Families getting off trains, coming back from their holidays would have seashells in their buckets, and various Dads would be carrying the cases and sticks of rock that had been bought for aunties, uncles and grandmas, mostly of peppermint flavour.

Rock, a colourful sugary sweet sold mainly in seaside towns, with the name of the town embedded in colour all through its length. When my grandmother came back home from holiday she bought me a net of sweets that looked like seashells. I had never seen anything like them and thought they were wonderful. She and my grandfather were better off than our family.

I liked to watch the trains leaving the platform. Each train had a guard with a flag and a whistle to give the all-clear for the train to start moving. Then the train would snort away as it picked up steam.

How trains and platforms changed over the years

The trains changed little between the early 1900s, as described here by my mother, and the 1940s and 50s when I remember them. My recollections are on separate pages with illustrations of compartments and corridors, windows that lowered using a leather strap and steam from the engine.

As it was summer, families would be bustling along the platforms for their holiday, with children carrying buckets and spades and Dad carrying the cases, all made of a dark brown fibre, like very thick cardboard and coloured to imitate leather. Children would stop a the Nestles chocolate machine and put a penny in the slot and out would come a bar of chocolate. All part of their holiday.

Yet there were quite a few sad faces left on the platform from people seeing off friends and relatives after a visit.

When we got on a train ourselves, it was just as much fun.

There were separate compartments seating about eight of us, and each compartment had two doors: one to the platform and the other to a corridor that connected the compartments.

The windows of the platform door would slide down, and the amount of the opening could be controlled with a leather strap. So we liked to take it in turns to lean out of the windows to watch the engine as it went round a bend puffing away or to hear the shrill whistle when it went into a tunnel. I never questioned how secure the door was as we leaned out of its window.

The dirt and soot

The trouble was that the steam from the engine was very dirty. Not only did it make our faces look a sooty mess, but it also blew bits into our eyes. So we didn't lean out as much as we might otherwise have liked.

As we neared the end of our journey we would scramble to the train window to catch our first glimpse of the sea. Then whoever saw it first would shout out, "The sea! The sea!".

I don't remember much in the way of discipline on the outing. Perhaps in those days we didn't need it.

When we got home, our mothers would always exclaim about how dirty we were from the smoke of the engine and the sand from the beach in our hair. We were washed, given something to eat and packed off to bed. We slept very soundly indeed that night.