The 1st Edmonton Boys Life Brigade in the early 1900s

For this page I am relying on photographs in my father's Clarke family and what I remember my Clarke aunts and uncles talking about, because my mother's brothers were not involved in the Boys Life Brigade. 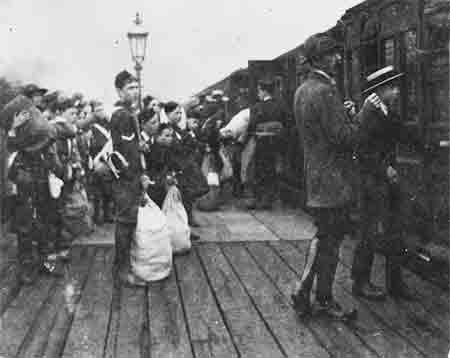 The caption on the back of the photo reads 1st Edmonton Boy's Life Brigade camp 1920 Shoeburyness, via Silver Street Station. 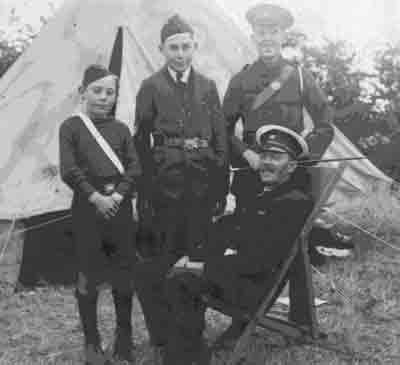 A camping event at the 1st Edmonton Boys Life Brigade showing the uniforms worn by the boys and the officers. Jim Clarke (an officer) is seated with sons Bill, Len and Arch. Arch, the eldest, has become an officer, as shown by his hard brimmed hat. Judging by the ages of my father and my uncles, the date was about 1918.

My grandfather Clarke, Jim Clarke, helped to run the local 1st Edmonton Boys Life Brigade and all seven of his sons belonged to it as children. This would have been between about 1910 and 1925. Then, as I understand it, there was some disagreement between my grandfather and whoever was fully in charge, after which the youngest Clarke son was told that he had to leave. Presumably the other sons had already grown out of it.

Although I don't know where the Boys Life Brigade met or who was in charge, the photos tell a story of their own. Clearly, there was a uniform: what look like soft pull-on hats were worn by the boys and hard brimmed hats by the officers. A band of some sort was worn across one shoulder which could have indicated rank, although it could equally well have been for carrying purposes.

Clearly too, life skills were high on the agenda, because the first photo shows tents for camping and the second is evidence that the brigade ran a summer camp at the seaside. The boys had kit bags for carrying their needs while travelling and these looked rather like off-white sacks.

Interestingly, the second photo happens to give information on Silver Street Station in 1920. The platform is not solid but is made up of wooden planks, and the lighting is by gas, like the gas street lamps of the time. It is just possible to see that the train had separate compartments for passengers. Each compartment would have carried about ten passengers, with one five sitting facing the other five either side of the door. A corridor would have connected the compartments, as I well remember from my own childhood in the 1940s and 1950s. Very early in my life, I can't remember when, 3rd class rail travel was abolished, leaving only 1st and 2nd classes. It is a pity that it isn't possible from the photo to see the class of the compartments marked on the doors.

The Boys Life Brigade and the Boys Brigade were different organisations during the time that my grandfather was involved with the Life Brigade. I understand from Wikipedia that the two organisations merged in 1926. Apparently the Boys Life Brigade objected to the use of weapons or their representations whereas the Boys Brigade did not. It seems highly likely that this was what my grandfather objected to and why the Clarke family ceased their involvement. My grandfather was a man of firm religious beliefs and a staunch member of Tanners End Mission.

Officers of the Boys Life Brigade, probably at a summer camp of a number of brigades from different areas, c1920. Jim Clarke is on the far left and his eldest son Arch is front left.