The beaches were mined during the Second World War and for some years afterwards because it took time and expertise to clear them.

I was a young child at the time. My parents did take me to the seaside on rare occasions, but this was because my mother liked the sea air and watching the waves. It was certainly not for me to play on the beach. There was no hope of making sand castles or paddling. Equally, though, there was no expectation of it. 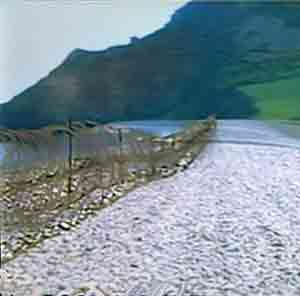 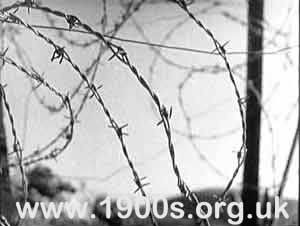 Another view of barbed wire beach defences. Both details of screen shots from old films. 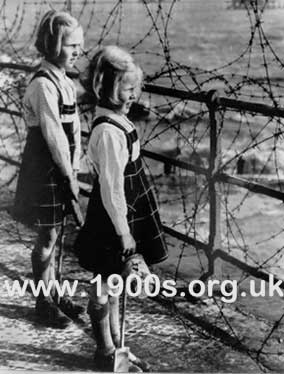 Children in wartime Britain looking at a beach from behind barbed wire. Detail from a photograph in the D-Day Museum. Children's decorated metal buckets for playing in the sand, from before the war, probably the 1930s. Photographed in the Brighton Museum of Toys.

There was none of the traditional seaside fun for children. Barbed wire prevented entry anyway. If anyone had managed to get through, they would have been blown up if they stepped on a mine. That might have meant instant death, but more likely loss of a limb.

Once the war ended, it took a number of years to clear the beaches. So young children of my generation never knew what it was like to play on beaches or swim in the sea. Leisure centres, if they existed, were closed for the duration of the war.

Yet, as a young child, I didn't miss what I had never had or knew nothing about and as far as I knew my friends felt the same.