It was entirely normal for children to go to Sunday School on Sunday afternoons, and I think our parents probably welcomed it to have some peace and quiet for themselves. Sometimes they went out for a walk.

On Sundays and for going to Sunday School we children had to wear clothes that were described as 'Sunday best', and when I went there my mother would wag her forefinger at me and announce, "Now don't you come home looking as it you have been drawn through a hedge backwards". I always wondered how I would look if I really had been drawn through a hedge backwards, but I never asked. I can now understand how she felt, though, in view of the hard work that was involved in washing clothes. 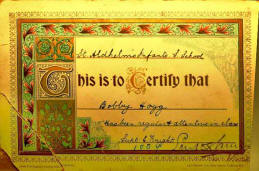 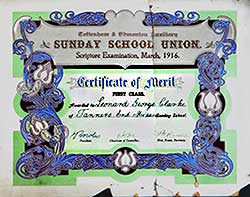 Certificate of merit in a 1919 Sunday School Scripture exam, awarded to Leornard George Clarke by the Tottenham and Edmonton Sunday School Union. Tap/clickfor a larger image.

The thing I hated wearing most of all on Sundays were my Sunday best shoes. One pair had patent leather toe caps, and it seemed that no matter how careful I was they would get scratched so that a little triangular piece would get pulled up. I always tried to stick it down with a little bit of spit before going home but the day of reckoning inevitably came. On Monday when these things were put away, I knew the when I got home from school for mid-day dinner that I was for it. It was always, "Come here mi lady", and "When did you do this?", etc, etc.

My brothers and I started at the Sunday School at St Aldhelms Church because it was the local Church of England church for the Huxley Estate where my family lived in Edmonton. However the minister left and his place was taken by a retired missionary with a wife and daughter. They were a very sombre family and things seemed to fall apart. So my brothers and I changed to the Sunday School of the Tanners End Mission. (Our part of Silver Street was called Tanners End probably because the leather trade was conducted there at one time.) The Mission suited us very well, although my father didn't approve of its evangelical stance. Even though he didn't attend church, he favoured the Church of England.

The teaching at Sunday School

Sunday school teachers in those days were really dedicated and religious people. However they were not necessarily well educated and often taught things that I found out later were not true. As I enjoyed singing the rousing hymns, it never occurred to me to question or disbelieve the words.

I particularly remember There's a place for little children above the bright blue sky, and I still feel hurt and disillusioned that heaven isn't really directly above us. Incidentally I am equally disappointed that there isn't really a man in the moon. As a child I could look upwards some nights and clearly make out his face. A poem by Thomas Hood expresses my feelings perfectly. He too had his daydreams, then later had to face reality. When this poem is recited nowadays, it tends only to be the first verse, "I remember, I remember the house where I was born", but it is the last verse that expresses how I feel:

I remember, I remember
The fir-trees dark and high;
I used to think their slender tops
Were close against the sky:
It was a childish ignorance,
But now 'tis little joy
To know I'm farther off from Heaven
Than when I was a boy.

As children went to Sunday School whether they wanted to or not, it is not surprising that some of the boys were not always well-behaved. The Sunday School superintendent would stand on the platform to keep order. When he wanted to call someone to attention, he had a habit of snapping his fingers with this thumb and middle finger and then pointing his index finger at the child concerned. I remember one occasion in particular: There were two brothers with the surname of Berry who seemed to be full of fun, and one day when the superintendent wanted one of them to behave, he shouted "Berry!" When one got up, he said, "Not you, the elder Berry";. My father, like a lot of the men, made elderberry wine, and elderberries were very familiar to us children. So the superintendent shouting to an elderberry set all of us laughing.

To encourage children to attend Sunday School, all the Sunday Schools that I knew gave children a stamp for each attendance and a brown paper book to stick them into. These stamps were like postage stamps but larger with a biblical picture and text on them. When we had a full book, we had a small prize. We also had some very nice larger texts given to us, suitable for hanging on the wall.

The Sunday School also ran an outing to the seaside every summer by train to encourage attendance and a sense of community. 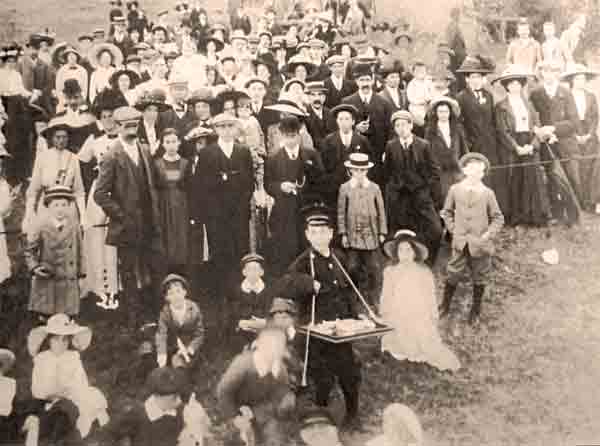 There was also a Sunday School tea. We children very much enjoyed these teas, but it was the company as much as the food which consisted of thick slices of bread with salmon and shrimp paste and a slab Madeira cake.

As I got older, social life revolved round the Mission. It was such a friendly community! We had great fun. I joined the Band of Hope and Christian Endeavour there, and their teachings were good grounding for later life. I met my husband through Tanners End Mission.

If you can add provide a photo a of a book of old Sunday School stick-on texts, I would be pleased if you would contact me.