The Edmonton windmill and Windmill Road: recollections and photos

According to a website on windmills that no longer seems to be available, the earliest reference to the existence of the Edmonton mill was in 1720. In 1826 Joseph Robinson was the miller. He was followed by his son Isaac in 1845, and then by another son Benjamin in 1867.

According to records in Enfield Local Studies and Archives, the remains of the mill were demolished in the late 1920s, but the adjoining granary lasted until after World War II.

Parts of Windmill Road were demolished at the same time as the demolition of Millfield Road for the Aylward School, now the Aylward Academy. (I went to the Silver Street senior boys top floor of the building in 1955 to Xmas 1958, and we used to come out of school and walk along to Millfield Road. The first corner you came to was a house but you would cross Millfield Road and on the other corner was this an off Licence and sweet shop. We boys used this as our tuck shop.)

Going further down Silver Street to Windmill Road the first corner was the shop in the following picture, but of course we boys did not go that far when all our sweets and pop could be supplied by the off licence.

The sails of the old mill can be seen on the left of the photo below. The building with the weather cock was the grain store and butted onto the road. The chimney stack at the centre is, I believe, of the windmill cottage. This building remained in a derelict state up until the early 1960s. My school cross country race started here in 1958. 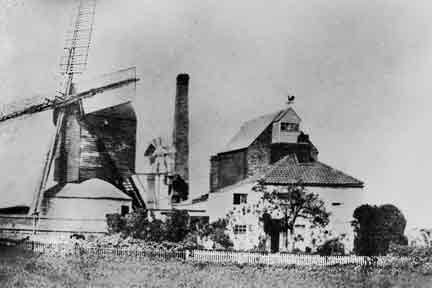 An early photo of the Edmonton windmill, held in the family of Robin Toms

The mill was run by my husband's great great grandparent in the 1840s and through the 1850s. Apparently Youngs Parfrey owned the leasehold from at least 1846 until it was auctioned off after his death in 1872. Over the years it was run by his brothers Edward Parfrey (c1846-1857) and Philip Parfrey (1857 - ?), as well as other millers. Youngs did not actually run the mill as he had a manufacturing business in London.

Using census information for 1861 and birth details for several of my husband's ancestors, I am reasonably confident that Benjamin Garnham (1825-1904) and his wife Letitia followed Philip Parfrey (1857-?) as millers. 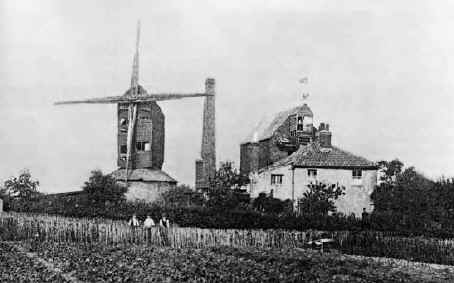 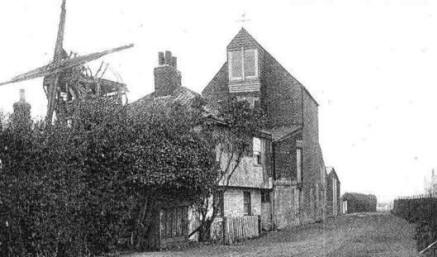 Summers Nursery was opposite Taylors Nursery and they grew, according to my husband's relative, Lilian, pink roses. She thinks they were bushes, and they can be seen in the c1920 photograph of the Windmill. Evidently there was a man who worked for Summers Nursery called Little Titch, a very small man who owned a donkey and cart and would ride up to Covent Garden each week to buy fruit and, I think, vegetables to be sold at the nursery. He housed his donkey in the warehouse at the Windmill. Also there was a Glass Blower who worked in the warehouse. Lilian said that, as children, they used stand and watch him working after school, and it was like magic that the big bubble appeared each time at the end of his long pipe.

Windmill Road was built by my great great grandfather, Samuel Green. The family must have been quite well-known in the area: Samuel's wife, Mrs Clara Green (later Mrs Clara Lambert), was the local nurse and midwife; Archibald Green was at one time the local policeman; and Miss Ethel Green was a school teacher at the local school.  [This was presumably Silver Street School.]

When I first went to school in the late 1940s, the warehouse in the photos was still there, as a more-or-less derelict shell, right on Windmill Road, but there were no signs of the chimney, the mill or the cottage. The beams to support the floor of the gantry house where the man is standing were still jutting out of the wall, but I cannot remember whether they jutted out across Windmill Road (which means that the ridge of the warehouse roof ran east-west, and the cottage was on the opposite side of the road from the warehouse), or whether they jutted out to the south (which means that the ridge was parallel with Windmill Road, and he cottage was next door to the warehouse, towards the south).

I suspect the latter, but cannot be certain. If this is the case, the photo is taken looking north-east, with Windmill Road behind the high hedge at the right of the picture, and then running up past the warehouse and the chimney

The warehouse was on the west side of Windmill Road, virtually opposite the junction with Henley Road which clearly did not exist then as it contained houses built in the 1930s.

When I went to school there was a hedge along the west side of Windmill Road, with a run-down (or so it appeared) nursery behind the warehouse and running north to Huxley Road. The foundations of glasshouses could be made out on the ground, with water tanks at the end of them, where we used to catch newts. There was a much more prosperous nursery on the other side of Windmill Road, which stretched across to the end of Lopen Road. Some time in the 1950s or 1960s (probably the '60s), this was built on, joining up the two ends of Oakfield Gardens (the different roof pattern can readily be seen on Google Earth). In fact Google Earth, shows that the warehouse was half way down the eastern side of the chess-board-looking playing field marks, at 51 deg 37 min 8 sec North, 0 deg, 4 min, 50.47 sec West, and the mill itself must have been at the south-west corner of those markings.

Windmill Road still exists (April 2009) and there still are some Victorian-style houses in it opposite the ends of Huxley Road and Cheddington Road. I think they were called Harrington Terrace. According to Google Earth the houses opposite St Aldhelm's church have gone, presumably in connection with some expansion of the school which was built on the site of Millfield Road, built on the mill field, some 20-30 years ago. The school is now called the Aylward Academy, after Gladys Aylward, the missionary who went to China and was the subject of the book The Small Woman by Alan Burgess and the film The Inn of the Sixth Happiness starring Ingrid Bergman.

On a separate page is an annotated 1960s photograph by Andrew Dickson, taken from the top of St Aldhelm's spire with labelled features of the surrounding area.