Why shop staff needed to be alerted to customers waiting

While I was a young child in 1940s Britain, there were far more small shops than there are today. Many were owned or run as family businesses.

The individuals serving in the shops tended to have to manage the stock as well as serve. So they were kept busy, often out at the back of the shop. In order to know that they had a customer, they needed to be alerted in some way.

One type of alert was to let a shopkeeper know that a customer had entered the shop. This was done with a bell above the shop door which was tripped to sound as the door opened. 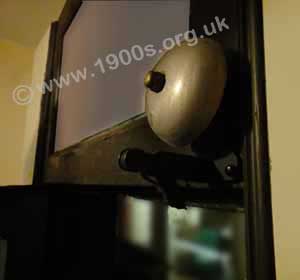 Doorbell over the door of small shops which would ring as the door opened, announcing the arrival of a customer. Photographed in Milton Keynes Museum.

These early bells were manual ones, not electric ones, and they made a characteristic 'ting' sound as the clapper hit the bell casing. The 'ting' couldn't always have been easy for the shopkeeper to hear from out at the back. Later bells were electric, rang for longer and were louder. 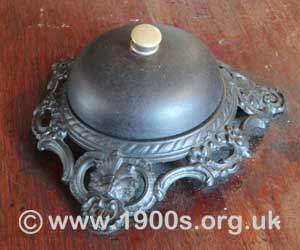 Bell on the counter of small shops which a customer could press to bring someone out to serve. Photographed in The Black Country Museum.

Once inside the shop a customer could call the attention of the shopkeeper by ringing a bell screwed on to the shop counter. This bell, too, was manual. The knob at the top had to be pressed smartly down to drive the clanger against the bell casing. It was not an electric press button switch. It had the advantage over the doorbell in that customers could press it more than once if the shopkeeper did not seem to have heard the first time.

Customers readily accepted that there might not be an assistant behind a counter to serve them because it was so common. Whereas today we might try a tentative 'Hello', the standard was to shout out 'Shop'. I was with my mother when she did it once in the 1970s, and I felt very embarrassed.

Shops empty of sales assistants must have been ideal for shoplifting but it apparently wasn't sufficient of a problem for anyone to mention it in my hearing.