We paid in pounds, shillings and pence, i.e.£-s-d. In practice, though, most things we ever bought in the early 1900s only cost a few coppers. More expensive things were normally priced at a penny below the next shilling. For how these prices were displayed in shop windows, written in handwriting and pronounced, see the separate pages.

Women shopped locally when I was a child in the early 1900s, and I sometimes went with my mother to our local shops in Edmonton. (Never with my father, as it was unheard of for men to be seen doing women's work.)

Why shopping took such a long time 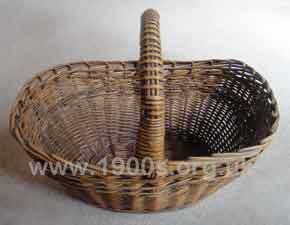 Wicker-work (cane) shopping basket. Such baskets were heavy even when empty, made in the early 1900s by a professional basket maker, courtesy of Richard Cole.

There were no supermarkets to sell everything in one visit. So we had to go to all sorts if different shops - see the side menu. So shopping was a lengthy business. This was especially so because even everyone was served individually and had to wait while the shopkeeper went to get or took out every single item. Also many of the goods had to be weighed out and wrapped for each customer, and social chit-chat was expected. It was, though, quite interesting for me to stand and watch the shopkeepers rapidly manipulating the weights on the scales as we waited in turn to be served. They did it so quickly and they always seemed to get nearly right just from size alone.

Why shopping was such hard work

Quite apart from the time that shopping took, it really was physical work. This was because we had no cars to carry our purchases back home, and the wickerwork baskets were heavy even before anything was put in them.

Fortunately it was common for shops to deliver. It was also common to send children on small errands. I often had to go and pick something up when my mother ran out.

How goods were wrapped

My mother wrote nothing about how loose goods were wrapped, but I understand that that it was much as I remember in the early 1940s. 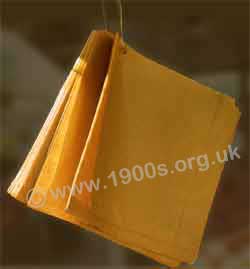 Paper bags on a string, ready for one to be torn off for use.

Some goods like potatoes were tipped straight into the customer's bag, suitably lined with newspaper.

Small goods were packed in white paper bags which were often printed with the name of the shop for publicity purposes - although this was an extravagance that could not be maintained during the austerity of the Second World War. Larger goods went into brown paper bags. The paper bags were supplied by the shopkeeper who kept them on a thin string and tore one off as it was needed.

In my mother's time in the early 1900s, children's sweets went into a cone of twisted newspaper, but I never saw this.

Pat Cryer, webmaster and daughter of the author


When shops were open

Men worked a five and a half day week and were paid on a Saturday morning. After that there was money in people's pockets. So shops would be open till perhaps 8 pm.

Although most of the shops were built as shops with flats for the shop keepers above their shops, some shopkeepers opened shops from the front rooms of their Victorian/Edwardian terraced houses - see for example, the photo of the shop front in Leicester.

My mother never mentioned shopping hours apart from at Christmas. So if you can provide any information, I would be pleased if you would contact me.