Fish could be bought fresh or dried. Fresh uncooked fish was sold by what was called 'Wet fishmongers'. In later years, this was shorted to just 'fishmongers'.

Our mothers could ask the fishmonger whether they wanted hard roes or soft roes, and to find out which was which, the fishmonger would press the side of the fish with his hands and from a small hole out would come a tiny amount of roe, which he could recognize as hard or soft. 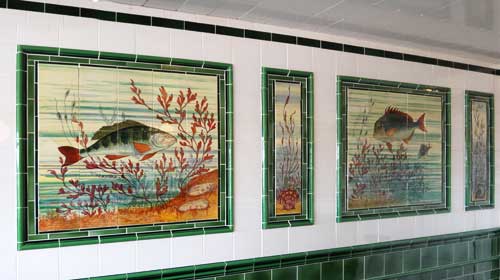 Inside wall of a fishmonger shop, all tiled, for easy cleaning.

Photographed in the Black Country Museum.

The frying took place at the rear of the shop. We children could watch it because around the counter were sacks of potatoes for the chips and we would climb on them to see over the counter.

The fishmonger's wife would stand over large vats of bubbling oil, with vapour billow­ing out. She would have two containers, one with flour and the other with batter made with flour and water. She would dip the pieces of fish into the flour, then into the batter and then then drop it into the hot oil. It would sizzle away until it was golden brown. Then she would take it out with a wire slice with a longish handle and put it onto a wire rack to drain off the surplus oil. All the time, noise was going on round the counter with people shouting orders.

When the fish was ready, our mothers were asked if they would like any salt or vinegar. Then the whole order was wrapped in newspaper to be taken away.

The pieces of batter that came off the fish were called crackling and we children would buy it in halfpenny portions.

Fish shops in Edmonton from the 1911 census

The 1911 census shows that my mother was right in her recollections about one of the fish shops: John Bennett, 39, fishmonger, born Bethnal Green lived at 113 Silver Street with his wife Harriet, 42, born Stepney, and his step daughter Mary Mable, 15 born Bethnal Green.

Another fishmonger in Silver Street was George Payne, 32, born Hackney living at 13 Silver Street with his wife Rose, 28, born Stepney, who assisted with business, and sons George 7 and William 2. (According to Carolyn Middleton, her great grandfather, Alfred William de Grussa (an Italian name), went to work for Mr Payne. The shop sold only fresh and smoked fish - no fried fish and chips. The hours were long. Her great grandfather left home at 5am and never got home until late, after the children were in bed. He worked six full days and had to go back on Sunday mornings to clean up. Apart from serving in the shop, he had to prepare and smoke the herrings to make bloaters and also smoke the haddocks. These had to be opened up, soaked in brine and then put on steel rods. Both the herrings and haddocks were then hung on racks in a smoke room, or 'smoke hole' as it was called. A fire was lit and oak sawdust was burned. This just smouldered and gave off thick smoke which smoked the fish. Eventually Mr Payne offered Carolyn's great grandfather the lease and the running of the business which he ran until 1922. By then he owned a horse and a four wheeled 'lorry' and used to go to Billingsgate Market to buy his fish.)

Yet another fishmonger in Silver Street in 1911 was Amelia Brooks, 53, born Homerton London, living at 87 Silver Street with her daughter Minnie, 20, born Hackney, her son Harold, 16, born Hackney and daughter Violet, 14, born Tottenham. All the older children assisted in the business.

However, there was no Steve Hatts in the 1911 Edmonton census. As my mother has been so remarkably accurate about the names of the other individuals she wrote about in her recollections, Steve Hatts must have moved in shortly after 1911.