Knitting patterns and knitting needles in the past

Money was tight when I was growing up in the 1940s and nothing was bought new if it could be recycled or mended. For example it was rare to spend money buying knitting patterns or knitting needles, even though they were available in wood shops.

Knitting patterns were regularly included in women's magazines. Whenever a woman found such a pattern, she would cut it out and keep it because she never knew when it would come in useful. 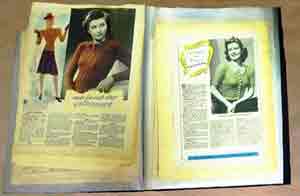 Knitting patterns were also loaned around among women.

Knitting needles could be bought from wool shops, but as they were effectively indestructible, most women did so much knitting that they built up a stock of them.

My grandmother's Victorian knitting needle container which was still in regular use in my 1940s childhood. It was made of brass with a black patterned overlay.

Some of my grandmother's knitting needles which were still in use in my 1940s childhood.

Included are one of my grandmother's bodkins and large crochet hooks because the bodkin illustrates the tarnish which was always on the non-stainless steel and the crochet hook shows the appearance of a bone tool. Knitting needles in my childhood were often made of bone.

Unfortunately, even using the size of needle specified in the knitting pattern, one could never be completely certain that the garment would turn out to be the expected size. The problem was not entirely with the needles. It lay with the tension, ie how tightly or loosely one pulled on the wool when knitting.

The pattern always specified how many stitches there should be to an inch and advised that if you knitted more tightly, you should use larger needles - and conversely, if you knitted loosely, you should use smaller needles. However, knitting is necessarily somewhat elastic, and without working a very large test piece - which no-one I knew ever bothered to do - it was impossible to be sure whether or not one was knitting to the right tension. This sometimes led to a rather disappointing result, in that hours of work could produce a garment that was too tight or too loose.

There is a gauge for knitting needle sizes in the photos of the display boxes on the wool shop page.

My grandmother's knitting needles are fit for use today, but their sizes are no longer in common use.

The language of knitting patterns

Knitting patterns used their own 'shorthand' for the various knitting actions.

Section from a knitting pattern, showing the knitting 'shorthand' for various actions. There are glossaries for these terms on the internet.

This 'shorthand' has almost entirely remained unchanged over the years. There is one exception, however: the abbreviation 'w' for wool has been widely replaced by 'y' for yarn to reflect the variety of man-made fibres which have replaced wool.

Knitting patterns and their shorthand were straightforward to follow when you were used to them, rather in the same way as text spelling is on a phone.