Men's activities in the early 1900s

On the working-class housing estate where I grew up, all the men of the house went out to work. There was very little mechanisation, so many of them did the sorts of work that was later taken over by machines. The man next door for example painted bicycles. In particular it was his job to paint the fine line along the centres of bicycles. For this he had to screw up one eye, and as he had to do it so much he tended to screw up that eye all the time in his everyday life. 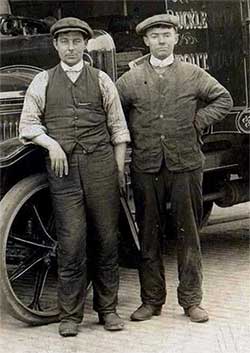 Others did various jobs: my father was an ambulance driver and the father of the boy who later became my husband was an insurance man who called at doors to collect the contributions.

What men did in their leisure time was also varied, depending on what happened to appeal to them, although the following tasks that were expected of them.

My father, like most fathers in the early 1900s in working class households such as ours, grew his own vegetables in the back garden. Some men also had allotments.

I particularly remember my father's runner beans. My mother never had to buy any as we always had a wonderful crop. I must say, though, that this was largely due to the efforts of my brothers and myself because we would have to take the barrow and shovel out into the road to collect horse droppings as manure. My father then put the manure into a galvanized tin bath and then use it as he wanted it. So it was not surprising that we had good beans. We didn't particularly like the job of collecting the horse droppings, but in those days we children did as we were told, no questions asked, and we did enjoy playing with the barrow which was a respectable one with rubber tyres.

What was done with a glut of runner beans

In the early 1900s the runner beans were prepared for salting by laboriously using a knife to 'string' the edges and slice the beans. These days efficient bean slicing gadgets are available.

As the runner bean crop was so good, my mother would preserve much of it for use in the winter. She did this by salting them.

My father, like a lot of the men, made homemade wine. Elderberry and parsnip were the favourites, and he made them in the large china jug that was supposed to be for hot water for guests to wash in. He put the fruit into the jug and fermented it with a lump of fresh yeast floated on a slice of toast. The smell was vile, but the wine was reputed to be very good. Maybe people were just being polite or maybe there was little else that was as cheap.

My father also made Turkish delight. I don't remember how he did it, but I know that he did make it because we always had it on Christmas evenings. Making it was supposed to be a long process.

More jobs in the home expected of men

House maintenance such as decorating and mending the family's boots and shoes have their own pages. Men were also in charge of the family finances. They gave women what was called their housekeeping money and they paid bills. Women did all the manual jobs that they were deemed capable of or intelligent enough to do (however true this might have been) but there were always odd jobs for men. Remember that men were always considered to know best and that women promised to obey them when they married, something which was taken surprisingly seriously.

And for men's relaxation: meeting in the pub

My father was not one for going to the pub, but a lot of men were. I recall him sending me with a jug to the off-licence for a pint of porter, which was a kind of beer.

The off-licence was attached to a pub and I could see the men in the bar. Although I belonged to the Band of Hope and had been taught to sing, My drink is water bright, I never looked on these places as sinful. First of all I liked the frosted patterned glass windows which must have afforded the customers a certain amount of privacy. To me, the men seemed so happy chatting away and smoking. There was no understanding of smoke being unhealthy, and the atmosphere was laden with it. Ignorance was bliss.

The only part of my task that I did not like was walking back slowly, so as not to spill the porter.

Warming the beer from the off-licence

I used to have to go down to the off-licence every night and get my Gran a pint of Stout. She used to warm it up with a poker which she put into the coals of the kitchen range until it was red hot.

It always seemed to me that men seemed to congregate in the newsagents-cum-tobacconists. This always felt like a man's shop because it was where the men bought their tobacco and their evening papers. A group of them always seemed to be there talking about items of the news, particularly the war news. The reason I went in was because the shop also sold magazines.