The knife grinder was one of the street merchants who came round the streets. He would sharpen all sorts of blades which were not limited to knives.

Why knife grinders were in such high demand

Although blades were made of steel, they were not the stainless sort that we know today. They blunted quite quickly and needed to be sharpened regularly, as they were in constant use by men and women alike.

Victorian or Edwardian kitchen knife. The blade blackened with use as it was not stainless, and the edge needed to be re-sharpened regularly. Knives became thinner and thinner with repeated grinding down during re-sharpening, and eventually they became so thin that they snapped. 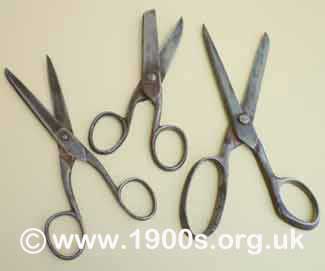 Victorian or Edwardian scissors, blackened and blunted with age and use because they were made of steel which was not stainless.

Women used knives every day for making meals and scissors mostly for mending clothes and dress making. Men used knives for mending boots and for all sorts of odd jobs. Carving knives were used on Sundays with the Sunday roast.

How knife grinders plied their trade

The knife grinder plied his trade around the streets. First he would stand in the road and call out in his sing song voice:

"Any knives or scissors to grind?"

Then, having alerted the women, he would knock at every door in the road with the same question.

How the grinding wheel was powered 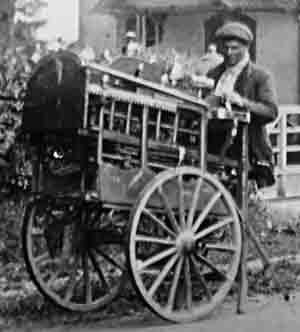 Early 1900s knife grinder. Detail from a photograph in the Willis Museum, Basingstoke.

Unfortunately it does not show how his feet are working to drive the wheel. 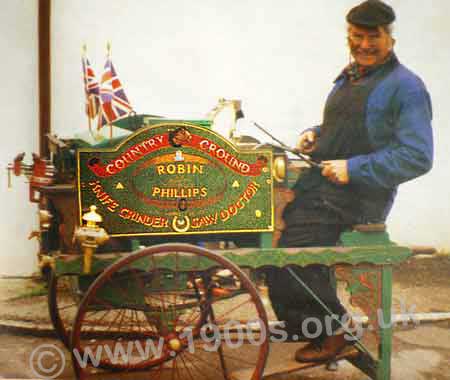 This cutting was pinned to my mother's recollections of knife grinders, but was probably photographed at a heritage fair as it looks too grand for regular functional use.

Knife grinders covered a large area. The one that I knew travelled on foot with his equipment on a handcart with three wheels, one in front and two at the back.

Where knife grinders slept and ate

Being the son of one of these travelling street vendors, I can tell you where they slept and ate on their travels. Most of the time they knew where they would be headed, so they planned accordingly.

My father's favourite places to sleep were the town Fire Departments. Since the firemen worked 24 hours per day, they had their own kitchens and make-shift beds. My father would ask to stay the night and for that favour, he sharpened any utensils that they needed sharpened. So he was out of the weather, in case of rain.

Many of his meals were had by offering to sharpen a restaurant owner's knives in exchange for a sandwich or soup.

This page really needs a photo of an old-style knife grinder to give a better indication of how he used his feet for grinding. If you can supply such a photo, I would be very grateful.