Milk transit from farms to dairies

After the cows were milked at the farm, the milk went into large aluminium drums known as milk churns. These were left in a shady place for collection by horse and cart and onward transit to a train station. They then travelled by train to the various stations from where they were delivered - again by horse and cart - to dairies.

The following pictures illustrate the process.

Milk collection in churns from farms 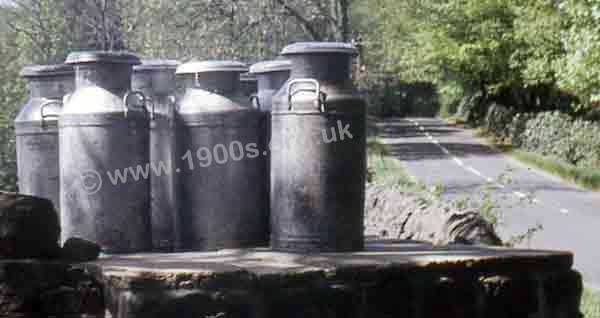 Milk churns waiting by the road-side for collection.

My mother asked me to take this photograph sometime in the 1970s while we were on holiday in a rural area. She said it reminded her of her childhood and was a sight rapidly disappearing. In her early 1900s childhood there was no refrigeration and it was no wonder that the milk went off quickly, standing in metal churns beside the road waiting for collection. Even then it had to travel by train to the cities. 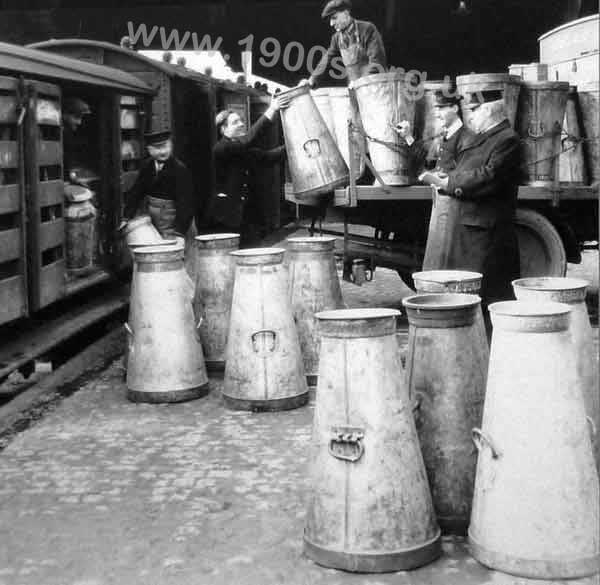 Loading milk churns onto a train - photographed from a display in the Swindon Steam Museum. According to the caption: 'In the 1920s, 60 express trains brought fresh milk from country farms to cities and towns every day. Today milk is carried entirely by road tankers'.

Our milkman had a horse and cart, although some roads had milk deliveries by handcart. The horse and cart always reminded me of drawings of Queen Boadicea's war chariot, high in front where the reins of the horse rested, then graduating to lower towards the back. The back was about a foot from the ground so that the milkman could easily step off to serve customers. He carried milk churns with him, and his schoolgirl daughter helped him with the rounds. 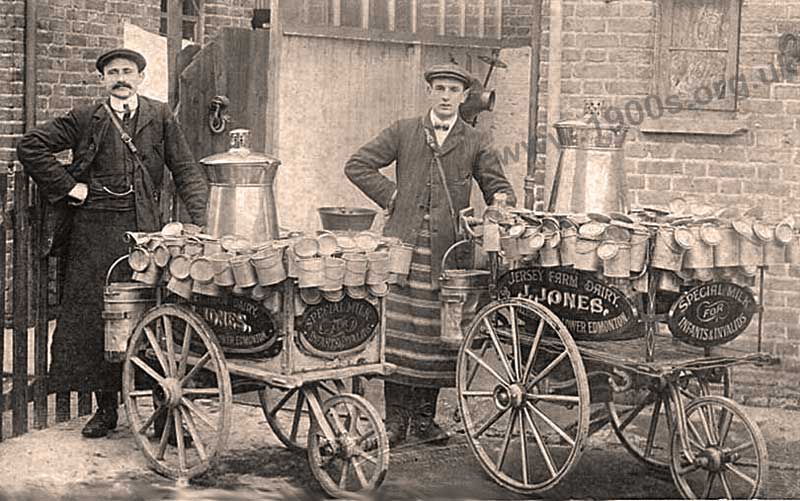 John Jones (on the left) and his assistant with their hand cart deliveries. Jones dairy business was in Edmonton; as the details on the barrows show. Photo courtesy of Edwin Jones, who would be grateful for any further information. He knows that John Jones had 3 sons and a daughter and that his two eldest sons were born in Edmonton. John then moved to a shop/dairy in Masbro Road, Kensington.

The milkmen who delivered to houses

The milkmen who delivered the milk to houses were employees or family members at dairies.

How the milkmen delivered the milk to houses

I remember the milkman coming to our door bringing a large can of milk with two measures hung from the side: a pint one and a half-pint one. He then emptied one or more of these measures into our own jugs, which were metal with spring lids.

The frequency of milk deliveries

This milkman called at the house twice a day, first early in the morning and again later on. In hot weather he came more often. 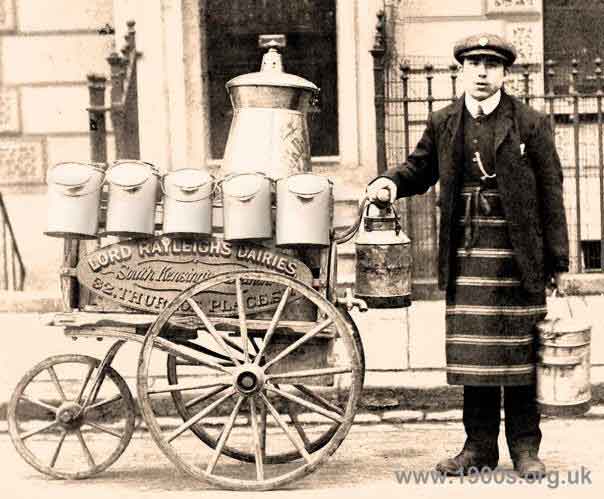 Milk delivery boy for Lord Rayleigh's dairies, delivering from a hand cart, courtesy of Pauline and Alan Hawkes. Note the milk churn and the cans for bringing the milk to doorsteps. 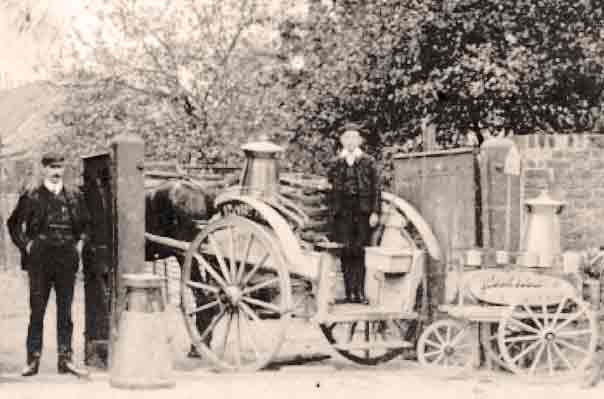 Milk delivery from Hobbs Dairy in Lower Edmonton. The horse and cart, the milk churns and the jugs are as my mother describes for her local dairy in Upper Edmonton. Note the milkman's uniform which would have varied from one dairy to another, although the peaked cap would have been a standard. Possibly this milkman was helped by his son (the boy in the photo) just as my mother describes her family milkman as being helped by his schoolgirl daughter. Photograph, courtesy of Miranda Pender (see https://edmontonodyssey.blogspot.com).

Although everything looked clean to the naked eye, hygiene was unheard of, and no doubt there were plenty of germs on that large can that went from door to door. Perhaps this was one reason why the milk would go off so quickly, although lack of fridges, sterilisation and pasteurisation would have contributed.

There were inspectors, who would come round to test the milk. This was very necessary before the advent of sterilised and sealed bottles. It was well known that some milkmen would add water to their milk. I remember hearing my father say while reading the local paper, "Old so-and-so has been prosecuted again for adding water to the milk". I even heard it said that some milkmen topped up their milk from the local pond.

Milk quality, 'top of the milk' and cream

What is particularly noteworthy is that the milk wasn't homogenised or sterilised, i.e. the cream was not mixed irretrievably into the milk. It settled at the top, was delicious and always known as the 'top of the milk'.

The importance of giving good measure

In my childhood in Ireland, I remember that when dispensing milk from a churn to give a measured amount, the milkman would always give a small amount extra, which was known as a 'tilly'. I think it is probable that the term comes from the Irish word 'tuilleadh', which means 'more'. (It's hard to give you an idea of how the Irish word is pronounced, so you'll just have to take my word for it that it is not too dissimilar to 'tilly'.) If such a practice existed in England, then it would probably have had a different name for the extra amount.

When, as a child, I weighed out goods in my uncle's food shop, he told me to be sure that I added just a little bit more, just to be sure that no customer could accuse him of giving under weight. This practice must have existed for milk when it was delivered from a churn as Stephen Drury confirms above for Ireland.

The practice is somewhat akin to the idea of the baker's dozen [and to the makeweight for bread.]

The women didn't pay for their milk as it was delivered. The milkman carried a book in a leather pouch, and every purchased item was entered into it. Then women then paid for a whole week at a time.

The first milkman that my mother mentions was probably either William Parker (senior or junior) or Alfred Parker. According to the 1911 census, William senior, 41, was a master dairyman, born in Warley, Essex, William his son, 22, was born in Romford, Essex and Alfred, 15, was born in Edmonton. They lived at 4 Bedford Row Upper Edmonton with William (senior)'s wife Mary, 40, who assisted in the business and was born in London, daughter Lily, 19 and sons Henry 17, Ernest 13, Stanley, 11, and Percy 9, all born in Edmonton.

I found no-one by the name of Hussey in Hazelbury Road in 1911. The milkman who my mother writes of must have moved in shortly afterwards and probably belonged to the family of Henry Hussey 58, milk carrier, born Bridport, Dorset who lived at 176 Langham Road in South Tottenham with his wife Ellen, 57, also born in Bridport with two single sons, William Hussey, 23, born Hornsey, also a milk carrier, and Henry Hussey 25 a printer. Grandson Fred Johnstone, 5, lived with them.

It would be interesting to know how these businesses related to those of the dairy shops in Silver Street.