Work in and around an old-style British farmyard

It was not until the late 1940s and into the 1950s that British farming started to modernise, largely as a result of the shortages during the Second World War.

To anyone old enough to remember the 1950s, the work described on this page would be readily recognisable. To anyone younger, it must seem to come from a different world. 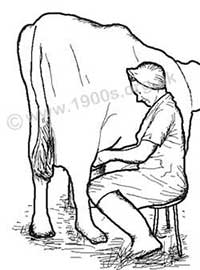 Woman milking a cow by hand. Note the three-legged stool, the wellington boots and the obligatory 1940s headscarf.

Seasonal work in connection with the harvest have their own pages: ploughing, reaping and threshing . This page is about the lighter work that was done on a daily or frequent basis in and around the farmyard.

Much of the lighter work, or at least its organisation, tended to fall to the farmer's wife, although farmhands and their families would all rally round, as necessary, to ensure that the work would get done. The various tasks could not be left undone irrespective of the weather or how tired workers were. Otherwise the animals would suffer or the produce and profits would be affected.

It was the farmer or one of the farmhands who brought the cows in from the fields for milking. This was straightforward because the cows seemed to know when it was milking time and would congregate near the gate. Some farmers used a dog to round up any strays.

The milking took place in the cowshed and tended to be the job of the farmer's wife with help as available. Most of the farmhands could turn their hands to milking if necessary.

The person milking would sit by a cow's udders on a three legged stool. The three legs were essential because they enabled the stool to stay stable on uneven ground.

Milkers would first wash their hands and the cow's udders with warm water. This was not solely for hygiene purposes; it stimulated the milk production.

Milking was a skill. It consisted of a special kind of pulling and squeezing of the cow's udder and directing the flow of milk into a galvanised bucket. It was quite hard work. Recognising when it was time to stop because the udder was empty was another skill.

The milk was either warmed to kill the bugs (pasteurised) or it was refrigerated. Then it was poured into a milk churn and either delivered round the local houses or picked up in churns for a larger market. This transport was by horse and cart, and later by lorry.

This traditional way of milking was common right into the 1950s.

Feeding the hens and collecting eggs

Feeding the hens and collecting eggs also tended to be the job of the farmer's wife and anyone on hand to help her. The work involved filling the water troughs and putting grain and food scraps into the food troughs in the henhouse. Food was also scattered around the farmyard to encourage the hens out to scratch around and scavenge for themselves.

Eggs had to be searched for and collected every day, often twice a day. It was fairly straightforward with hens that laid in the henhouse, but they could lay outside, under bushes or wherever, which could take some finding. Such eggs could easily be missed, so there was no way of knowing how old they were. They were generally kept separately and then broken into a cup before use, so that they could be thrown away if they had gone bad.

The job of selling the eggs to callers and packaging the eggs for sale from the local shop normally also fell to the farmers wife. As I understand it, eggs were not normally packaged in any sort of protective packaging, Local callers just carried them carefully in their normal wickerwork shopping baskets.

Some of the milk had to be made into butter. The churning of the milk was driven by a horse walking round and round. When the butter was ready it was divided into packs by weight, wrapped in greaseproof paper, and delivered by horse and cart to customers or to the local shop.

The dairy was an off-room of the farmhouse. It was just brick and concrete, rather than tiled but it was very clean.

Making butter on the farm

My grandmother worked in the farm's dairy each day churning butter which was made on a thick marble table. This was stored in a large marble box that was lowered down the well in summer to keep it cool.

There was also the feeding of the dog, the horses and pigs and whatever other animals might be in the farm or farmyard.

Meals for family, farmhands and other workers

The farmer, the farmhands and anyone else who was working on the farm at the time had to be fed. Their mid-day meal had to be organised by the farmer's wife. It was normally meat and vegetables, nothing fancy, all cooked on a large kitchen range.

Men working in the fields had food taken out to them.

Everyday work for the farmer's wife

Everyday housework still had to be done. So the farmer's wife had to do or organise the washing and cleaning as well as feeding the family and farmhands. It was all very hard work.