How and why farms were different before World War Two

One of the huge transformations to keep Britain fed during World War Two meant that farms and farming would never be the same again. This page is about farms before the transformation. Much of it was what was known as 'subsistence farming' because the farming was 'mixed' which was inefficient and profits were low.

Most people in Britain before the 1950s would recognise the features of a farm and farmyard because the countryside was only a short bus ride away from most towns. Double-decker buses gave excellent panoramic views of the fields, and the walks from bus stops took us into fields and through muddy farmyards. Farmers never seemed to mind strangers walking through their fields and farm yards, provided of course that they did no wanton damage. Transmission of farm diseases like foot-and-mouth and salmonella didn't seem to be issues then.

Drawing of an early farmyard and farmhouse, courtesy of Bill Hogg

Map showing the functions of the various buildings.

Bill Hogg who supplied the drawing and gave much useful information, points out that the perspective is not entirely accurate in that the farmyard was wider and the farmhouse larger than shown in the drawing. Neverthless the drawing gives a good indication of the almost higgledy-piggledy size and shape of the buildings as they grew up in an ad hoc manner as required.

Below the drawing is a map of the same farmyard and farmhouse showing the functions of the various buildings. Both images enlarge on tap/click.

Who owned the farms

Farms were relatively small, such that in rural areas, there seemed to be a different farm every few miles in any direction. In general the farmers rented them from fairly wealthy landowners.

Mixed farming and what it entailed

Farming was almost entirely 'mixed' in that, unlike in more recent times, there was no single speciality such as, for example, just dairy farming or just pig farming. Most farms usually had a small herd of cows, a bull, a few pigs, chickens and crops. 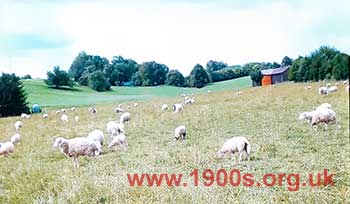 There were no sheep on the farms that my informants knew, sp if you can tell me anything about sheep farming at the time, please let me know.

Request from the webmaster

If you have information, a family story or anecdote about farming sheep before the 1950s, I would be pleased if you would contact me.

The cows and bull

There were usually something like twenty or thirty cows and one bull.

The cows were milked twice a day in the cowshed. They were taken into the cowshed at night and led out to the fields in the daytime. The bull, though, was not allowed in the fields with the cows because he could be dangerous. He had a ring through his nose. He lived inside a barn except for when he was brought out to service a cow. Farmers knew when a cow was ready for servicing because her milk was drying up or it was some time since she calved. The cows were bred for meat as well as for milk.

The pigs were kept in the pigstye and not allowed out. I well remember walking past them as a child. The pigstyes were quite small, and so very, very muddy, and the pigs themselves were muddy, not that there seemed to be any indication of ill-treatment. I understand that they would eat almost anything, including pig swill.

When the pigs were fat enough, they were taken to market or a butcher in a horse and cart.

The farm's horses were the heavy sort who were there for heavy work where there were no petrol driven vehicles.

They were wonderful large and strong animals, bred specially for farm work and they could pull quite heavy loads with comparative ease and respond readily to instructions. They were widely known as 'shire' horses, 'cart' horses or 'work' horses.

Probably the hardest work that the farm horses had to do was to pull the heavy reaping machine. Two pairs of horses were employed wherever possible. While one pair worked, the other pair rested in the shade.

The horses were tired and hungry at the end of the working day. They would usually walk at a faster pace homeward bound than they did going to work, because, as they neared the farm their thoughts naturally turned to food and rest.


In fact 'work horse' was a common term in my family. If my mother felt that she had been working particularly hard with no help from other people who had been lazing around, she would come into a room and announce, "Here comes the workhorse".

At the end of a gruelling and probably boring time in the fields, the men had to tend to their horses before themselves. The horses lived in stables when not working.

The massive size of farm horses

I remember a lovely farm horse which had furry ankles and an enormous flat back on which I said I could do ballet! I was very young at the time.


The farmers, the farmhands and their families

The farmers who worked these small farms were known as tenant farmers because they rented their farms. They, their families and their farmhands had to work extremely hard for long hours because the mixed farming required so many different and essential tasks.

The farmer's family lived in the farmhouse, while the farmhands and their families lived in cottages some short way away.