Reaping: how corn was cut and dried in the early 20th century

The ever-decreasing 'island' of corn in the centre of a field while the corn is being cut.

Once a cornfield was considered ripe and the weather was dry, the corn had to be cut. This process was known as 'reaping'. I used to watch it a lot in my childhood in the 1940s, and I was also involved - but that is another story.

The reaper: the reaping machine for cutting corn

The machine for reaping, known as a reaper, was developed in late Victorian times. It reaper was pulled along by one or more farm horses or a tractor.

The cutting of the corn started round the edge of a field and circled round into the centre, leaving an ever decreasing 'island' of corn.

As the 'island' got smaller, the local wildlife ran out to escape as described on the shooting parties page.

My friends and I would concentrate more and more on watching out for rabbits which would run out from the remaining crop. These poor rabbits were in dire trouble once they had broken cover of the crop and started to run for safety around the edge of the field. They were unable to run as fast as expected as the binder cutting the corn leaves behind around 4 - 5 inch long stalks sticking up. These are called stubble and severely reduce the speed the poor rabbits can run leaving them open to my chasing them and bashing them over the head with my stick.

It was common practice for the farmer to collect all such dead rabbits on his tractor ready for a sharing out amongst the helpers at the end of the day. I would regularly come home with a couple of rabbits for my mother to cook.

Scythes for harvesting: difference between scythes and sickles

In awkward areas of a field, men had to cut the corn by hand using a long, curved blade known as a scythe.

What distinguishes scythes from large sickles was that scythes have two grips, slightly offset from one another. Scything was a two-handed job. Sickles were much smaller and designed for one-handed use. 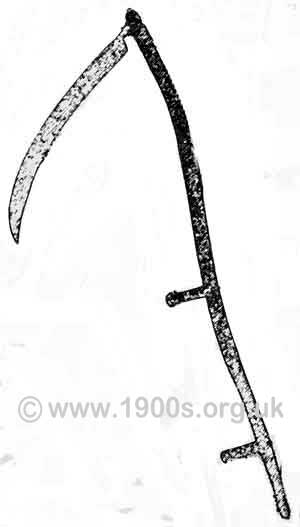 Above: Sickle, designed for light work using just one hand.

Left: Old English scythe. Note the two offset wooden grips in the wooden handle and the relatively small angle between the blade and the handle.

My father had a scythe and I tried to use it once with no success at all, although I was given to understand that it was very efficient in experienced hands. Apparently there was a rhythm to using it and one's back had to be kept upright, with a side-to-side rotation of the torso making the cutting action - not the shoulders.

Scythe blades had to be sharpened frequently; a blunt blade led to inefficient cutting with the user grunting and flailing around.

Food and refreshments for the workers

The worker bring their mid-day food from home

For their refreshment, the men brought along a bottle of cold tea without milk or sugar and a couple of fat bacon or cheese sandwiches. There was also a nosebag for the horse. At the end of the day, an empty nosebag served as a handy place to carry home a rabbit for the pot provided that a fox or badger didn't get in first.

I remember my aunt preparing a picnic tea for the men who were harvesting. We took a large basket out to where they were working and set down a check tablecloth on some stubble in a corner of the field.

The reaper not only cut the corn, it also bound it into rather untidy looking bunches, known as sheaves.

Where the reaper had been, all that was left on the ground was short, harsh and prickly stubble.

The sheaves had to be dry before the stage of separating the grain, so they were manhandled into what were known as stooks to dry in the sun. A stook was a group of sheaves which were stood up against each other.

Good weather was crucial for complete drying. A little rain didn't matter at this stage, though, as long as there was enough sunshine to dry the stooks afterwards. 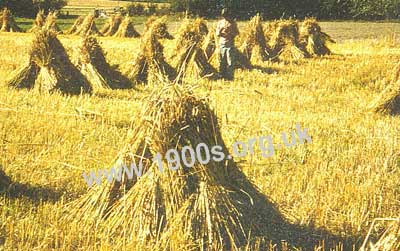 A field of stooks. The front one clearly shows that it is made up of loosely bound bunches of sheaves propping each other up. The harsh stubble around each stook is clearly visible.

In the early stages I would help by going round and standing up the sheaves to help the grain keep dry. It was easy. One only had to pick up a sheave in each hand and lean the two together to get them to stand up together. Four or five such pairs of sheaves were leant together to make the stable structure called a stook.