Ploughing fields in times gone by

As a child in the 1940s, I see ploughed fields at a distance from our double-decker buses.

A well-ploughed field with straight furrows and no weeds showing.

At that time, I assumed that the purpose was to produce long channels or furrows for seeds to be sown into. Judging from the appearance of ploughed fields, I could have been right, but I wasn't on a number of counts. Read on ...

Ploughing is the turning over of topsoil to bury weeds and prepare the soil for seeding. It mainly took place in the Autumn when most of the weeds had died back.

How a plough worked

A basic plough consisted of an almost circular blade in front of a larger curved one. It was and still is designed to be pulled through the ground, normally by a tractor or a horse.

The circular blades cut through the the ground and the curved ones turned over and buried the top layer of soil and weeds. 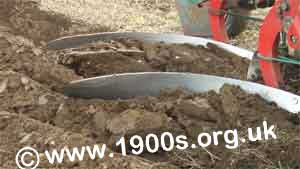 Whever did the plouging needed skills to operate effectively:

It took skill to set the blades so that they cut at a suitable depth: too shallow would mean that the weeds would 'see' daylight and grow, so contaminating the next crop; too deep would mean that the winter frost was less likely to penetrate the top soil and break it up into a fine tilth.

The furrows had to be straight and at a uniform distance apart as gaps would mean weeds and heavier soil at sowing time.

The soil needed to be recognised as in the right state for ploughing: Too dry and hard would mean that the plough would not readily go through it, and too wet would mean that the furrows would be washed away. I don't know how much leeway there was on this, but skill and experience would have been needed to make the decision of when to plough.

A horse-drawn plough, photographed at a vintage ploughing competition.

In my early years, I saw farm horses pulling the ploughs.

It was the task of the farmers or farmhands to guide the horses and the ploughs. This meant walking behind the ploughs or with the horses, whatever the weather and keeping alert to give the horses instructions. Good weather must have meant a lot. 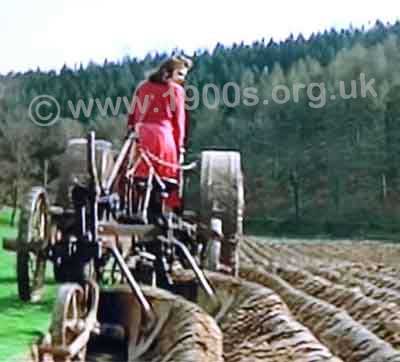 The tractor which this WW2 land girl works has no covered seat cabin and the wheel tyres are solid. Edited screen shot from an old film. 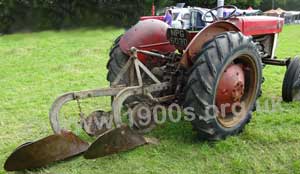 Plough ready to be pulled by a tractor showing the two round cutting blades and larger turning blades.

Farmers and farm hands must have given many sighs of relief when tractors replaced horses. They could sit in the driving seat, manage the controls rather than walking backwards and forwards across an entire field. Having to look backwards, though, to make sure that the furrows stayed even must have led to many a stiff neck.

Not that driving a tractor in these times was as pleasant as you might think. There were no covered cabins to sit in, so the seat was open to the air and the tractor tyres were solid, making for a bumpy ride.