What haystacks (also known as ricks) were

'Haystack' seems to have been a generic term to describe stacks of corn, straw of hay. Such stacks of all kinds were common sights in the fields while I was growing up in the 1940s. True haystacks, though, were stacks of hay. In some parts of the country they were known as hayricks or just ricks.

Haystacks. It is rare to get good photos of haystacks as they are no longer made and only lasted for one season. These old photos, unfortunately taken at night, nevertheless show outlines of what were common sights before baling became common.

What hay is and how it differs from straw

Hay was and is dried grass, grown as food for animals in the winter. Hay tends to be less course than straw. 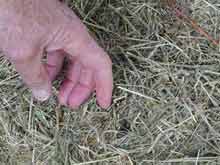 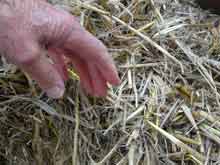 Hay and straw photographed at identical distances for comparison purposes. The straw is much stiffer and rougher.

How haystacks were made

Once the grass for hay was cut, it was left strewn on the ground to dry in the sun before being collected. The timing was critical and depended on the weather. The moisture content had to be 14% or less, otherwise the bacteria in the grass would multiply in the haystack and make it so hot that it would catch fire. At that time, the correct moisture content would have been a matter of judgement by experienced farmhands.

I never saw a haystack on fire, but gather that it was not uncommon. Losing a haystack to fire was a severe financial loss to a farmer.

If the grass didn't dry, it was carted off for silage.

Collecting and transporting the hay

Dried grass, now hay, being collected from a field where it had been spread out to dry.

Farmhands raked together the dry grass, now referred to as hay, and threw it onto a special cart which had folding slatted ends which enabled it to hold more. A special lightweight fork was used called a pitchfork - see the next photo - and the act of using it to load the straw onto the cart was known as pitching. 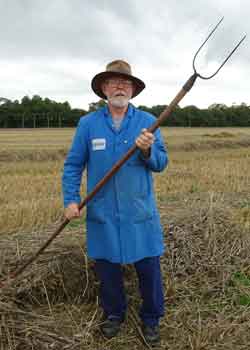 Man with a pitchfork and harvesting hat

The skill of tossing the hay

There was a certain knack in tossing sheaves from a pitchfork and many a laugh was had at the attempts of beginners, all good fun.

The cart took the hay to the side of the field, close to a gate for easy later access and close to a hedge if possible to keep off the worst of the weather.

Stacking the hay into a haystack

Once in position, the farmhands stacked up the hay into what were known as haystacks or ricks.

Haystacks came in all shapes and sizes and were quite large and tall, such that a ladder had to be used for the uppermost layers. 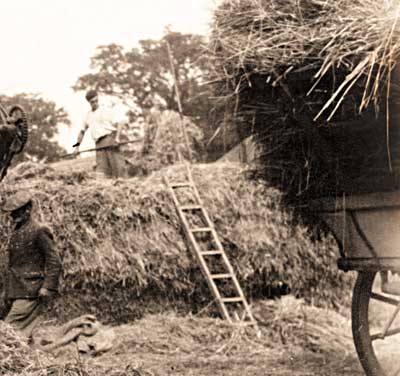 Some haystacks were built on frameworks supported above ground on mushroom-shaped stones to keep out rats, mice and other vermin, but as this was not always the case, stacks did get infested with vermin.

The final stage was to give the haystacks a rough thatch or mat covering to keep the rain off. 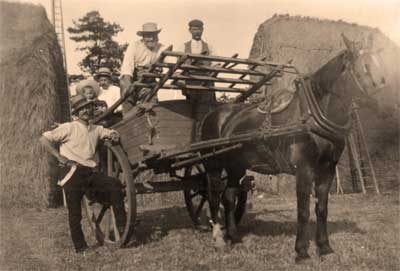 Haystacks complete at the end of a long day*

Note the height of the haystacks, their light thatch covering and the longer ladder on the back left. Also note the folding slatted front of the cart. (The folding slatted back is not visible, although it can just be seen at the edge of the top photo.) An edited detail of an image supplied by Send and Ripley History Society.

The haystack was only returned to in winter when it was broken open for animal feed.

Haystacks as playthings - and more

Broken haystacks were well-known as places where courting couples could lie together in relative privacy, although I dread to think of the insects that they must also have lain with. 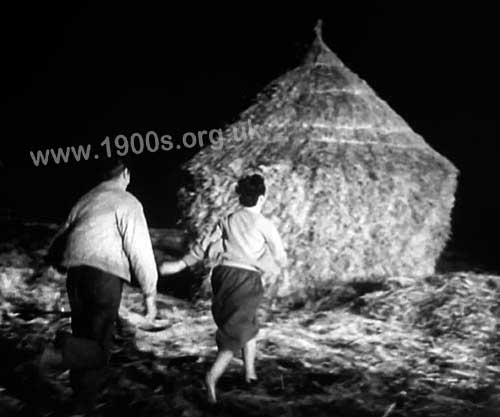 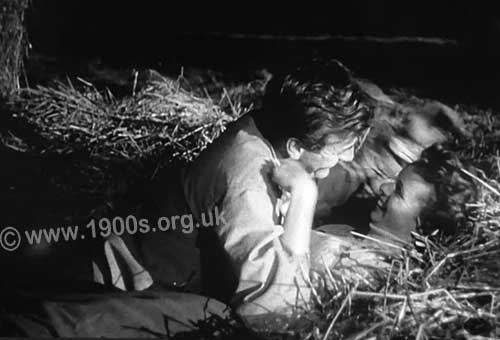 
Haystacks were also play places for children who would climb up them and slide down. Neither activity would have appealed to farmers because they opened up the haystacks to the weather.