How silage production changed in later years of the 20th century

A guest contribution by Dick Hibberd with photos by the webmaster

Silage, which is fermented grass, hay and other green matter, was and still is essential for feeding cattle in the winter months when fresh grass is not available.

In the first part of the 20th century it was produced by methods that permeated the countryside in late summer with a really noxious smell. Fortunately, later in the century silage production changed with considerable benefits to efficiency while also eliminating the smell.

The new production method was stimulated by the development of polythene, and, as I write in 2014, the same method is still used to day.

Signs to the traveller of modern silage production

In late summer, as you drive in the country, you will notice neatly cut fields strewn across with big black polythene parcels, something like the droppings from a ginormous deer that has relieved itself from 50 or 60 feet up. These closed packages are rolls of green matter, packed ready for fermenting into silage. 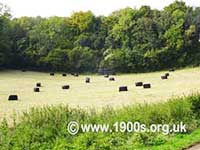 Black polythene bags of green matter/silage, lying in a field. 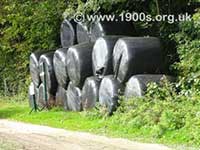 Green polythene bags of green matter/silage stacked ready for use. 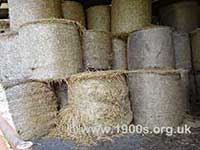 Rolls of fresh, unfermented hay for immediate use.

The farmer who owned the field with the green bages said that he chose green polythene because he thought it looked nicer and that functionally it could be any colour.

The green matter, these days, is a blend of special grasses and maize. Indeed fields of maize are now grown specially for the purpose.

The grass and maize mixture is not treated with molasses as with the older method of silage production, although other nutrients may be added to encourage fermentation.

The mixture of green matter is machine packed inside polythen and just left to ferment in its own juice, aided by the heat of the sun on the polythene. It is ready for use in only a few weeks.

Tractors take the polythene packages to the edge of the field and stack them.

Then, as required, the packages are taken into the cattle sheds where the wrappings are removed and the silage contents simply unrolled into a great carpet of 'delectable' food for the cows to gently munch their way through. I imagine 'bovine bliss'!

This type of silage production is cleaner, less smelly and more efficient than the older method.

a group of farmers at a country show