Why blacksmiths and wheelrights used to be essential

Blacksmiths were often affectionately called smithies, as was their place of work, also known as a forge. There was at least one forge in every village, more in towns and cities. That is why Smith is such a common surname even today, as men's jobs often became their surname with various spellings, eg Tailor, Baker, Coleman, Cooper, Draper, etc. You can probably think of many more. 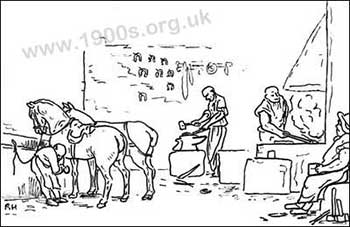 Inside a working forge/smithy, sketch by Rosemary Hampton.
Reproduced with permission

A smithy was a hot and humid place. During working hours a very hot open fire was always burning with its large bed of red-hot coals. This was for heating the metal so that it could be hammered into shape.

By the fire, on separate benches and around the walls hung all sorts of instruments for holding and bending metal.

The cavernous appearance inside a smithy

The mysterious implements hanging on the walls of the dark cavernous place looked to us boys looked like instruments of torture.

The smell of a smithy!

The charred hoof from a hot shoe made the most horrible smell that seemed to hang around inside and outside a smithy.

There was also an anvil to beat the hot metal against, various hammers and a selection of nails. A bucket of water stood nearby for cooling the red hot metal after its shaping.

On the walls hung various sizes of pre-made horseshoes.

The work of a blacksmith

Blacksmiths worked with metal, usually iron, by heating it in a very hot fire and beating it into the shape required. These shapes were many and varied, but primarily blacksmiths' work was fitting new horseshoes to horses whose old horseshoes has worn down or come off.

At slack times when there were no horses in to be shod, blacksmiths would make various size horseshoes and hang them on the wall in readiness. This 'wall decoration' could always be seen inside any smithy. 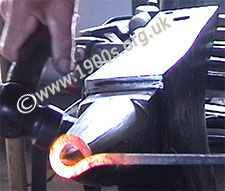 Blacksmith hammering red hot iron into shape on his anvil

The blacksmiths' fire and his goggles 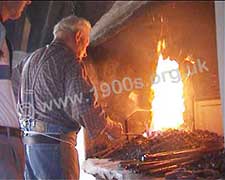 Our local blacksmith would stare at the very fires of hell through be-goggled eyes and sparks flew in all directions as he beat the metal into weird and wonderful shapes.

Blacksmith's goggles were to protect their eyes from hot sparks rather than against glare. The blacksmiths needed to be able to judge temperature from the colour of the coals.

How a blacksmith shod a horse

Horses hooves grow continuously. Depending on the level of work and the surfaces the animals work on, a horse will need new shoes every 4-6 weeks. Even if the shoes are not worn out, they will probably need to be taken off and the feet trimmed before being replaced.

Blacksmiths had to be strong to hold a horse steady while it was having a new show fitted - described as being 'shod' - and of course having to spend their days beating metal.

First the old shoe had to be removed with pliers, by holding the horse's leg between his own legs. This was a quick job unless the horse felt like moving. The blacksmith took various new shoes off his wall and tried them for size, just by holding them against the horse's hoof. Then, having selected a suitable shoe, he noted how its shape needed fine adjustments and set about reshaping it. He held the new shoe in the red hot coals until it too became red or even white hot and he reshaped it by beating it onto the anvil.

Once the blacksmith was satisfied with the new shape and while the shoe was still hot, he held it against the horse's hoof. This made a 'psssh' noise and burnt an imprint into the hoof. It didn't hurt the horse of course because horses' hoofs have no nerves rather like our own nails, and they are very much thicker. The imprint served to keep the shoe in position while the blacksmith nailed it in place.

How blacksmiths served the community

There was nothing our local blacksmith could not make and nothing he could not mend - to us he was Merlin the magician, but to the grown-ups who were able to coax a few more years use out of ancient machinery during wartime shortages, he was a Godsend. I don't think he ever went short of food, drink or cigarettes!

Wooden wheels had metal rims to prolong their life, but even they worn down or broke eventually, and it was the task of the wheelright to make and put on a new wheel.

The new rim had to fit tightly onto the wheel tightly so not come off in use. To arrange this, the blacksmith first expanded the rim by heating it inside on his fire.

Then he took the hot rim outside into the open air as quickly as possible so that it wouldn't cool too much. In its expanded form, it was straightforward for a second man to bang it into place on the wheel, using with his wooden hammer. Then the first man threw water over the wheel to cool it, so contracting it and fixing it firmly in firmly into place on the wheel. The second photo shows the steam coming off. 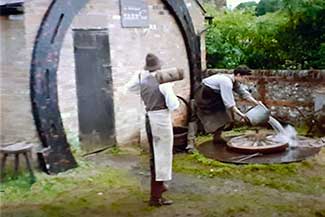 Wheelright with the hot, expanded rim placed over the wheel. The second man has already banged it into place with his wooden mallet which is now over this shoulder. 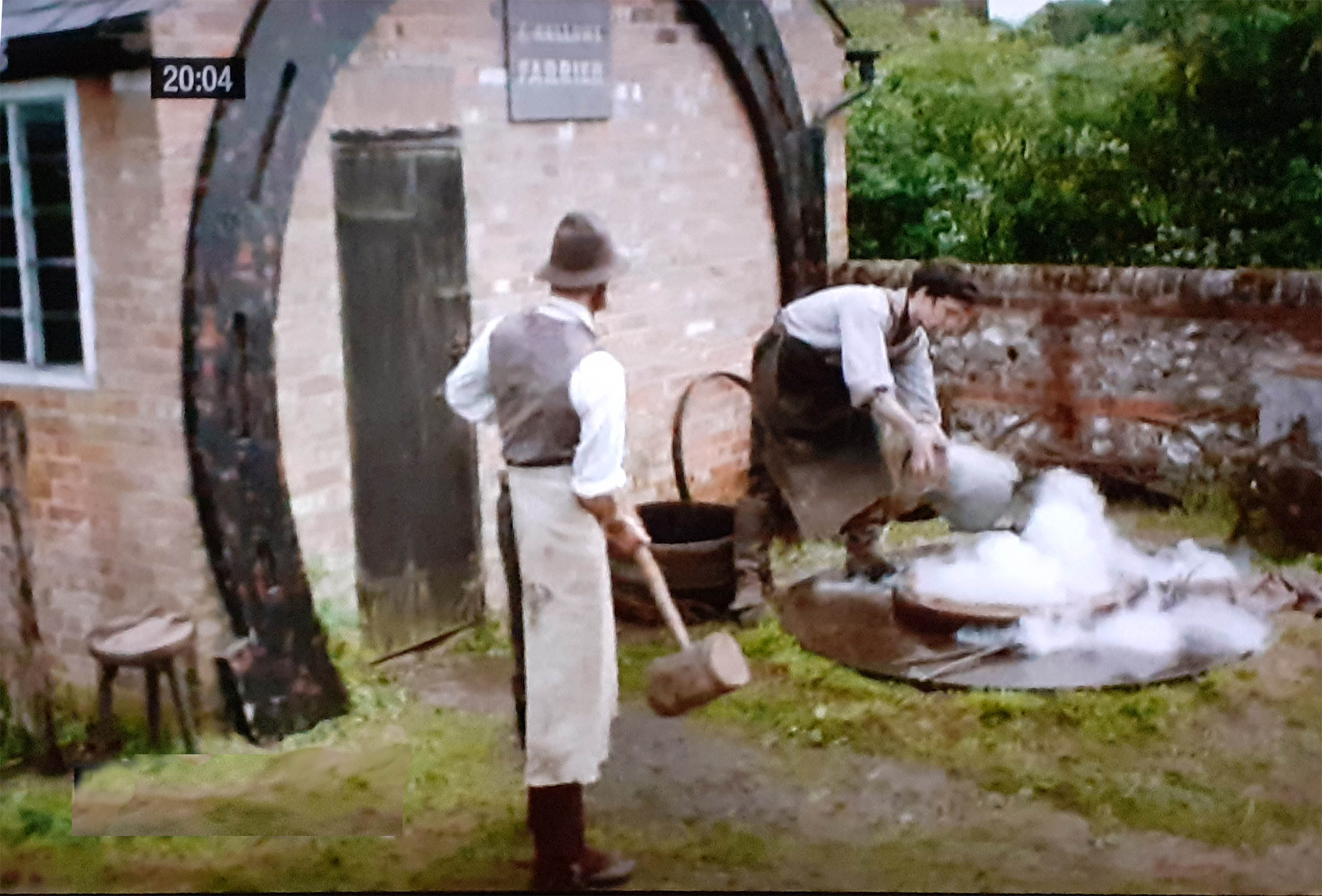 Steam coming off as the wheelright pours water over the rim to cool it. The second man's wooded mallet can be seen more clearly in this picture.

Smithies were always situated at a roadside for easy access. During open hours, the doors were kept open, not only to encourage trade but for ventilation. Smithies were hot, humid and very smelly places. You could feel the heat and smell the smell from outside.

From smithy to forge

As the century progressed, cars and other petrol driven vehicles were gradually replacing horse-drawn transport, but in rural areas, where horses were still used on the land, blacksmiths and their smithies remained. Only as tractors began to replace farm horses and petrol rationing stopped, did almost all blacksmiths become almost redundant.

Most smithies simply closed, but others concentrated on producing elegant ironwork. Then the name 'forge' took over from 'smithy'. 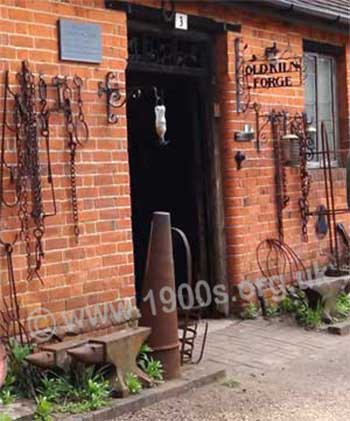 Forge specialising in elegant ironwork. Note the anvils on display outside as a link with the smithy past.