Silage - its preparation and smell in times past

The smell - and taste! - of silage

In the middle of the 20th century, anyone who wandered anywhere near a farm in late summer would recognise the familiar, noxious stench of silage. It was grass and other vegetable matter fermenting ready for use as winter cattle feed when fresh grass and hay would be unavailable. 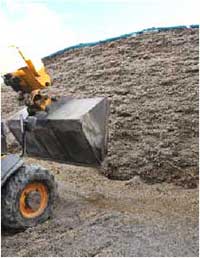 A pile of silage, known as a silage clamp, being opened up, photo courtesy of Maureen Lane. Just visible is a tarpaulin cover, pulled back for access.

I was abruptly introduced to the smell (and taste) of silage when, as a young child, I stayed with relatives in the country. Their milk tasted quite awful, and to me it was undrinkable. I was told that this was due to the cows having been fed on silage, and at the time, no-one seemed to think that it mattered.

I understand, though, that it was unusual for the taste of silage to get into milk. Certainly if it had, the practice of feeding cows on silage would have had to be dramatically rethought! Possibly my bad silage experience was due to contamination of the milk churns.

Difference between hay and silage

Fields of grass were set aside for hay and silage. When the grass was cut, it was spread on the ground to dry. How long it was left to dry for would dictate whether it would end up as hay of silage. Hay is dried grass, and, for hay, the grass needed to be completely dry. The hay would be collected by horse and cart and either taken to a storage barn or made into a haystack.

At my boarding school in the 1940s, the grass was even supplemented with the grass cuttings from our playing fields. Such an opportunity could not be wasted during wartime.

How silage used to be made

Silage was made from grass that had been left to dry for less time, so that it still had moisture content and was still green. This apparently made the silage more nutritious than hay and hence increased the milk yield.

This partially dried grass was placed to ferment in a pit called a silage pit or silo, and the green parts of other suitable crops were added.

Silage 'pits' or silos were usually positioned in farmyards. It was normally a three sided area, with an open face which provided access for bringing in the raw materials and taking away the fermented end-product.

Silage starts to degrade when exposed to the air. So the pit would be covered with an old tarpaulin or anything that was waterproof, and it was often overlaid with old car tyres to hold the tarpaulin in place in windy weather. These were easily removed by just one person when access was required.

There was no standard size of pit; it all depended on the needs of the farmer. The walls were often just ordinary building brick and the ground underneath was either concrete or just the hard standing of the farmyard.

Our school silo was about 14 feet diameter and 10 feet high, but I wasn't paying a great deal of attention to its size! I think it was originally used for storing grain, and was made of sections of precast concrete, which were bolted together. It was all rather like the interior sections of those marvellous tunnels they make these days that run under London and under the English Channel.

There were some spiral steps on wheels which we could climb up to leap down into the silo when we were required to tread its contents. The tractor kept feeding in more raw material, so it was much easier to climb out at the end of a treading session than it was at the beginning because the level within the silo had risen considerably.

On my uncle's farm in Scotland, grass for silage was cut in fairly small quantities at a time and each cut was stored in its own heap. Each heap was prepared in the same way as in vegetable clamps, i.e. covered with straw and then with sand to keep the generated heat in. Tarpaulin could also be used. The silage heaps were then used in rotation.

Use of molasses to speed up silage fermentation

The silage fermentation process was speeded up by adding molasses, a sticky dark by-product of refining sugarcane or sugar beets into sugar - essentially unrefined black treacle. As well as speeding up the fermentation process, it also acted as a preservative, rather as sugar preserves fruit in jam.

A clandestine use of molasses

At my boarding school, the molasses was kept in an old milk churn outside the silo, and it was poured over the grass cuttings at intervals with an old watering can. When the opportunity allowed, we boys would take an empty jam jar and steal a jarful of molasses to hide in our lockers. I can still taste it now on a piece of plain bread. As it was wartime, we didn't have enough butter ration to spread on our bread, but the molasses was heaven to our taste buds. We rarely enjoyed anything sweet in our diets because sugar and sweets were rationed.


Treading to speed up silage preparation

If you had a workforce to trample the molasses into the freshly cut hay, the fermentation would be a lot quicker. Then the silage would be ready sooner for the cattle to eat. We boys at school in the 1940s were such a free workforce.

The one thing I shall always remember is the stench, which exuded from our wellies which were stowed next to our school dormitory beds. The combined stench of 30 odd pairs of wellies, even with the windows fully open every night regardless of the weather, was quite unforgettable.

The cows eat the silage

The cows were fed in the cowshed. The silage was taken to them and put in their food troughs, probably with a pitchfork or shovel from a barrow - although I never saw this done. I do know that the cows seemed to love their silage, and whilst it might smell noxious to us, I imagine that it is rather like a good Brie or Camembert to cows!