Land girls in Britain in WW2: the Women's Land Army

One of the main spearheads of the Government Campaign to keep Britain fed in World War Two was to bring more land into food production. 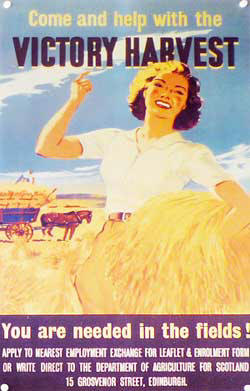 The Ministries of Food and Agriculture did calculations about land use and human need and found that it was far more efficient to use land for arable farming than for keeping sheep and cattle. Thus it became clear that land currently used for animals needed to be taken over for crops. Although this meant a decrease in the amount of meat produced, the Government decided that it would have to be one of the many wartime sacrifices.

The reduction in meat production brought with it a lack of animal fats in the form of butter and lard, so it also became essential to grow more oilseed crops.

Grassland was ordered to be ploughed up in order to expand the area for growing the crops which went straight into human food, such as carrots, wheat and potatoes. The target was to have 1.7 million more acres producing food by the harvest of 1940 and to have an additional 6½ million acres of arable fields by 1944.

A total of 300,000 farms were targeted by the Ministry of Agriculture for improvement, and the government funded additional workers and equipment to support the necessary changes. The vast majority of the new workers were women formed into what was called the Women's Land Army, staffed by women known as land girls.

Because the young men were going off into the armed services, young fit women were first encouraged and later conscripted to work on the land. They were known as land girls and were part of the Women's Land Army (WLA). They did a wide range of jobs, including milking cows, lambing, managing poultry, ploughing, gathering crops, digging ditches, catching rats and carrying out farm maintenance work.

So Britain had to dedicate every bit of land for food production - and this required manual labour.

Land girls were paid 28 shillings a week (£1.40), some 10 shillings less than the average wage for a male farm labourer, but this was quite normal at the time.

Land girls' pay was just another example of the inequality of pay for men and women doing the same work.

There was considerable propaganda about how wonderful land girls were. As a young child, I was even encouraged to tell people that I was going to be a land girl when I grew up! Heaven help us if the war had lasted that long!

The posters always showed land girls as happy or confident in what they were doing, although I doubt if that was the reality. It was hard, back-breaking work, and they did the country proud. (In fact all women had to go out to work to do the men's jobs unless they had children too young for school, were over a certain age or had other special circumstances.) 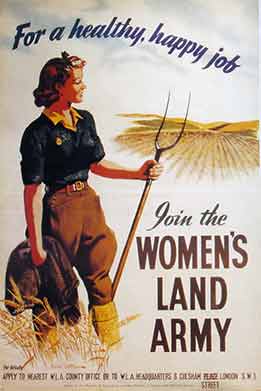 Poster highlighting the healthy, happy life in the Women's Land Army and encouraging women to join up

The land girls and their life and work

How land girls were trained and what they did

Before taking up work as land girls, the women had to have an introduction and receive basic training on a range of farm work and one of the places where the training took place was close to where we lived. When, as in our case, this was on a large estate, this introduction could be quite wide ranging and include dealing with cows, pigs, chickens, on the land and in some cases wood departments, while smaller farms would be likely to involve just one or two of these areas. After this introduction, the girls usually moved into more permanent areas, dependent upon their abilities or wish. Most of the land girls stayed on the farms or in dedicated hostels but some were billeted out in homes like ours.


Effects of double summertime on a day's work

The girls worked extremely hard and, particularly in the summer with 'double summertime' when it was light until 10.30pm - extremely long hours. They were equally adept with horses or tractors and the back-breaking task of potato picking. In the Spring with lambing and calving they were often at the farm all night.

Land girls varied in age from anything between 18 and into their forties, and they came from quite a wide variety of backgrounds. They were mainly volunteers. Women in that age group were required to do something to help with the war effort and the outdoor life clearly appealed to many of them more than indoor work such as in factories.

Some of the girls were quite 'butch' and could take on most men in an arm-wrestling competition. Others were very feminine and frail-looking to the point that one wondered how they managed at work. They were always a cheerful bunch and good company.

Each morning the land girls in our village 'marched' up the steep hill to get to Pendlebury farm - marching must have been psychologically easier than sauntering - and each evening they sang their way back down again to the billets.

The girls' only entertainment, apart from the radio, was to walk back up the hill again to the pub. They only did this once or twice a week because they were not overpaid for the work they did. In the pub they joined in the darts matches and the singing. There was always singing.

Very occasionally the WLA welfare branch would arrive at the billet to show films or to put on some live entertainment. Two or three times my friend and I were invited to see the films, usually Tarzan or Errol Flynn as Captain Blood.

There may have been the odd liaison or some shorter term arrangement with the local men but I was not aware of anyone being 'sent away'!

Mrs Pendlebury, the farmer's wife, herself not much older than 30, acted as 'housemother' and confident when needed.

In 1942 or 43 there was a group of land girls billeted in our village about a mile away from where I lived as a boy. Most of them worked at Pendlebury's Farm another half mile beyond our place. They were billeted in three large Nissen-huts, each equipped as a dormitory with a bathroom, kitchen and living area.

My family lived in rural Suffolk during the war where anyone with a spare room was required to take in evacuees. As my mother already had two young boys at home she didn't really want more children. So she offered to take land girls instead.


What happened to the land girls once they were trained

Once our land girls were trained they left for farms in other areas and new girls arrived. So we had quite a succession staying with us over the duration of the war. Some, though, proved such good workers in the local farms that they stayed on. A few even married local men and settled nearby.

Some 6000 women worked as lumber jacks, chopping down trees and running sawmills. They were known as Lumber Jills, and their significant contribution is largely overlooked.

Targets and achievements of the Women's Land Army

The result was that by 1944 the country could feed itself for approximately 160 days a year instead of only 120 days as had been the case when war broke out. A great improvement, but there was still the dangerous and costly need for the Merchant Navy to risk lives and ships to bring food in from overseas.

The end of the Women's Land Army

The Women's Land Army was not officially disbanded until 21st of October 1949. This was because it took time for the career farm workers who had served in the armed forces to be demobbed - and Britain still needed to grow as much from its land as possible because food shortages and rationing continued after the war.