Dig for Victory UK in the rationing and shortages of WW2

One of the spearheads of the Government campaign to make Britain more self-sufficient for food was to encourage the public to grow vegetables in their gardens and where possible allotments.

This feature of the wider campaign was called Dig for Victory. Rationing was so severe that householders needed little encouragement. 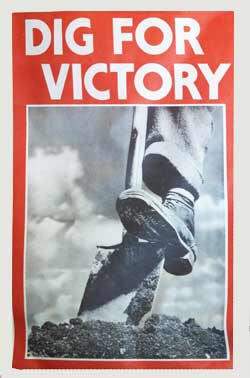 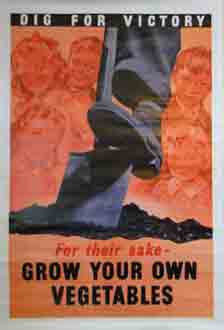 Photographed in the Museum of Nottingham Life 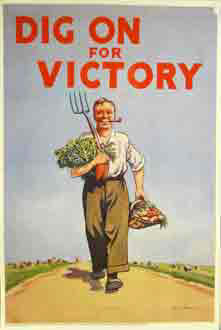 DIG ON FOR VICTORY poster photographed at Swansea Bay Museum

So, like many other back gardens, our back garden was turned into a vegetable patch. We also had had two apple trees, a cooker and an eater, and they fruited well.)

It was sad to get rid of the flowers, but I remember my parents' euphoria at the end of the war when we seeded a new lawn.

In the Allies countries, Victory Gardens was the name given to the spare areas of land used for growing food in war, but I don't remember the term ever being used in Britain.

Other fruit and vegetable gardens

Some local houses were empty for the duration, or billeted with WAAFs (ours were from RAF Kenley aerodrome). So to leave nothing wasted, we planted their gardens with spuds and sprouts and cabbages.

There was fruit from fruit trees in these gardens which otherwise would have gone to waste, and we made use of them.

We also collected blackberries and crab-apples from the hedgerows for pies and jams, although this required precious sugar.

The recollections below jolt my memory in that I do just remember my father belonging to the local Allotment Association, where he presumably bought seeds. Whether this was in the early years of the war before he was called up into the army - when I was still only a toddler - or just after the war, I cannot be sure.

I don't ever remember flower seeds being sold during World War Two.

Vegetable seeds could be bought from seed merchant shops, which were in most high streets, and from allotment association shops.

The seeds became available around the times when they needed to be sown and not at other times of the year.

There were no packets of seeds. The shops had their seeds in large containers. Small seeds were sold by weight and large seeds such as peas, broad beans and runner beans were sold by the pint. They were weighed or measured out and sold in brown paper bags.

Seeds were not rationed, but they were not always in good supply.

Seed potatoes were available in the spring at seed merchants and in Woolworths. The shop would place a notice in the window saying when the seed potatoes were to be sold and everybody got there early and stood in line waiting for the shop to open. Seed potatoes were not rationed as such, but you had to queue up for ages - and once the shop was sold out that was it.

As the above recollections are of the area around Edmonton in north London, the seed merchants were probably the corn chandlers that my mother wrote about in the early 1900s.

I don't think that there were seed merchants shops in Edgware where I grew up, but it was a relatively new community which was part of the expansion of the commuter belt in the 1930s. Peter Johnson mentions Woolworths, and I know that from the late 1940s that it had a very good and cheap gardening section in Edgware. My mother bought many of her plants and bulbs there.

There was a small nursery in Edgware, opposite the British Restaurant (the site that later became the public library), but I only remember it vaguely because it closed quite early on in the war.

Rather than relying on finding a shop that might have seeds to sell, it was common practice to save some from the previous year and to swap with friends and neighbours. This was particularly true of flower seeds.

Saving seeds required leaving one or more plant to flower and set its seed. At this stage, it looked quite tatty. Nevertheless it was important to wait until all the sap had left the seed case so that the seeds were quite dry. Then they were collected and stored in labelled brown paper envelopes. In the 1940s, there were no plastic bags, but even if there had been, they would not have been suitable for storing seeds. Plastic 'sweats', whereas the paper bags were slightly absorbent, so keeping the seeds dry.

The envelopes of seeds were kept somewhere free from mice and reasonably dry to over-winter. Damp seed goes mouldy and is no longer viable.

Saving seeds worked well because few if any seeds were hybrid. (Hybrid seeds are specially produced each year, and are common in today's seed catalogues because they are said to give better quality results. However, saved hybrid seeds do not come true to the parent plant, so need to be bought fresh every year.)

Pests - human and other

My mother's brother, on a twenty-four hour leave from the RAF, dug up our entire front garden and planted neat rows of cabbage plants which grew magnificently with the help of steaming manure from the milkman's horse. (It was my job to rush out and scoop that up with a coal-shovel before any of the neighbours got there first!)

One morning, when my mother pulled back the blackout curtains, the entire crop had been 'lifted' during the night! Granny said she strongly suspected that it was the work of one of the neighbours who was believed to have had a vegetable stall in Woolwich Market. She cursed the 'culprit' for years afterwards.


My husband's relative thought he would make the family more self-sufficient for food by growing vegetables and keeping a goat for milk. He kept the two apart with a fence. One day, though, the goat managed to get through the fence - and that was the end of the vegetables!

Fortunately grey squirrels had not yet arrived in any numbers and foxes were also in small numbers. Any rabbits would have been shot for food. I seem to remember that insect pests were sprayed with soapy water, but if you can add to this, please contact me.