Shooting parties for wild game and game fowl in WW2

Where I lived as a child in the 1940s there was countryside and farmland all around. So there was abundant wildlife. Provided that the rabbits, hares, pheasants, partridges, etc could be caught, there was no shortage of free and fresh meat in spite of meat rationing which didn't end until 1954. . 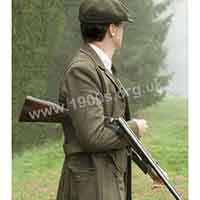 Man on a shooting party showing his gun in the safe 'broken' position for carrying.

My home was a few miles outside Cambridge but there were many similar open areas across Britain at that time. So my experiences of capitalising on the local wildlife for food would not have been unique.

I was still a young boy of around six years old, when my father used to take me on his shooting parties. These parties were extremely worthwhile for the free meat that resulted, but they were also social occasions which probably took place before the austerity of the war and for some time after rationing ended. The farmers appreciated clearing the vermin that attacked their crops and the shooting parties valued the free meat and the social activity.

My father's shoot took place in the grounds of the factory where he worked which was set in many acres, largely given over to farming. On specified dates, the owners permitted the shoots for their employees.

Getting to the shooting area meant walking across farmland. I well remember walking through a field of wet kale. It was taller than me, I couldn't see anything but kale around me and I got very wet and cold. It was most uncomfortable.

My father's shooting party consisted of those employees who wished to take part, probably between eight and 15, their dogs and anyone like me who was taken along to watch and generally help. No-one seemed surprised at the presence of a young child where there was live ammunition - 'health and safety' had not been dreamed up and I never felt remotely in any danger anyway.

Not everyone had their own dog, but there were enough dogs to be able to retrieve everything that was shot. Our dog, Bunty, was never trained to retrieve, but she always seemed to know what to do. She was, though, a golden retriever, and I wonder now if my father originally bought her breed because he liked the shoot.

'Beaters' was the name given to helpers who beat the undergrowth to scare the birds into the air where they could be shot.

Beaters at a large shoot

As a boy in Scotland in the 1940s, I was one of a group of beaters at a pheasant shoot in a fairly large shoot area of perhaps 1½ mile square.

The beaters' task was to frighten the pheasants into the air, so that the shooters could shoot them. We made as much noise as we could and did a certain amount of beating the undergrowth.

We spread out round the edge of the area and waited for a signal. Once it came we all started shouting, beating and moving inwards, and the men started shooting.

We beaters picked up some of the dead pheasants and dogs picked up the others. We then took all the dead birds back indoors where they were hung up on hooks. We didn't get to take any of them home with us but we did get paid as beaters.

I am sometimes asked if beaters were in danger of getting shot. The answer is, "Not really' because the area was so large.


My father's shooting party didn't have any formal beaters, although I know that they existed in other shooting parties. I may sometimes have been expected to undertake this task, but if so, I don't remember much about it. The noise of the shooting party seemed to work well enough, but ours was a fairly small shoot.

The shooting party stood in a line facing the field and fired together. The noise from the guns was extremely loud - but as I said, 'health and safety' had not been dreamed up, so no-one wore any hearing protection. This was, after all, the 1940s.

Then there was a break while the dogs retrieved the kill. After that, the line moved forward, guns were reloaded and the process was repeated.

Strategies for different types of kill

The pheasants and partridges were shot while they were in the air. This wasn't particularly difficult because they were ground hugging birds that never flew very high anyway. They could hear the shoot coming so fluttered up in the air to try to get away. This made them easy targets.

Rabbits and hares on the other hand had to be shot while on the ground. They lived in burrows close to hedgerows and in scrub. So they had to be crept up on very quietly, so as not to frighten them back into their burrows.

The ever-decreasing 'island' of corn in the centre of a field while the corn is being cut.

The strategy was different at harvest time. The corn was cut round the edge of the field moving inwards in a spiral leaving an ever decreasing island of corn in the middle.

As the corn was cut the rabbits, hares, rats and mice, etc retreated further and further into the island. Then at the last minute when the island became too small for them, they dashed out.

Stubble left after corn is cut

That was when the rabbits and hares could easily be shot. It was also easy to beat them over their heads with sticks because they couldn't run quickly over the sharp stubble.

Small boys like me were also expected to beat the rats and mice as they emerged. They were too small to be useful for food, but they were vermin that farmers wanted to be rid of.

The guns and ammunition

Each firing used a cartridge packed with small lead balls called lead shot. I don't remember my father carrying his cartridges in a gun belt. I think they just went in his pocket. I have no idea how expensive the cartridges were or even where they were bought, but there never seemed to be a shortage of them.

For safety during the shoot, guns were always carried opened up as - shown in the above photo - so that they wouldn't fire accidentally. In this state they were described as being 'broken'. At home, though, there were no safety precautions. My father's gun was never locked away.

Although everyone probably knew what they had shot, I suspect that the proceeds of the shoot were shared out more or less equally. Small items were carried in largish shoulder bags which were probably made of canvas, but larger kill had to be carried separately, usually by their hind legs. This is where I came in. I didn't mind carrying rabbits because they were small and I could dangle them easily. Hares, though, were so much bigger that I had to hold them with a crooked arm to keep them off the ground, and this was very tiring for a young boy.

One important thing to be borne in mind was that when birds and animals die, they urinate. So the kill needed to be held at arms' length after being shot as otherwise the person holding them would end up in a wet mess.

Preparing the kill for the kitchen

Different shoots must have had different arrangements for preparing the kill for the kitchen. In our case, one of the employees was practiced at gutting, and he did it for everyone's kill at the end of the shoot. He seemed to manage it with one swipe of the knife.

Skin or feathers still needed to be removed back home. This task often fell to me. It was easiest to de-feather while the bird was still warm, but it was still an unpleasant job. The small feathers, in particular, got up one's nose and there was a mess of feathers everywhere afterwards. It was a job for outside if possible.

I don't remember the kill being hung for long before being cooked, although my mother certainly did hang it. 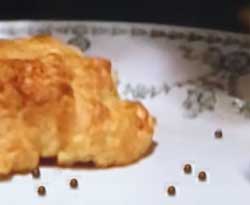 It was quite normal at the end of a meal for plates to be 'decorated' round the edge with pieces of removed lead shot. Lead is a soft metal, so as often as not, the shot removed from the mouth had tooth imprints in it, but biting at the wrong angle could chip a tooth.

Rabbit was white meat and tasted rather like chicken, although it was tougher. Hare was similar. Partridge and pheasant were dark meat with a stronger taste.