What British Restaurants were not

'British Restaurants' was not a general term for restaurants in Britain. It was the name given to dedicated restaurants set up to meet the needs of wartime on the Second World War British home front - see below.

Why British Restaurants were set up and what they did

In 1941, to combat the severity of rationing in World War Two, the Government set up what were known as British Restaurants. They were to sell basic meals at reasonable prices, off-ration.

These British Restaurants were sited so that they were in fairly easy reach of most families.

How British Restaurants were staffed

One reason why British Restaurant meals could be provided relatively cheaply was that the catering, cooking and washing up, etc were all done by volunteers - normally older women who regarded their input as a contribution to the war effort. They tended to be members of the Women's Voluntary Service (WVS) and they wore green uniforms.

I was told by an ex-WVS lady that WVS women had to buy their own uniforms out of their clothing ration. 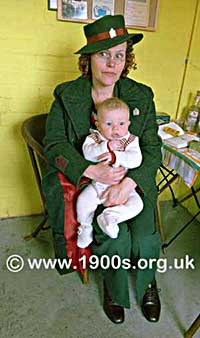 Uniform of the Women's Voluntary Service (WVS), photographed at a Brooklands 1940s Event. 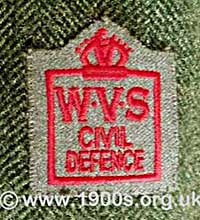 WVS ladies wore the WVS uniform in dark green - something like 'olive' green or perhaps 'British Racing Green'. There was a red and green emblem on the breast, and I am pretty sure, a belt of brown leather. There was also a felt hat, but I can't remember the exact style, except that it had a brim and was something like a smaller version of the Australian bush hat.

Another reason why British Restaurants were quick and cheap to set up was because existing halls were requisitioned for the purpose. Church halls and working men's clubs were typical locations because they already had basic cooking facilities and tables and chairs. 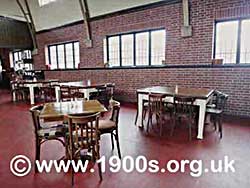 A working men's club of the sort used for British Restaurants, photographed at the Black Country Museum.

Where suitable facilities were not available, special prefabricated buildings were put up on waste ground - see the photo.

Our British Restaurant in Edgware, north London, where I grew up was such a prefabricated building. It was painted white and was on the site of what later became the public library.

My mother never took me into our British Restaurant, so I have relied on others to explain how the system worked.