Kitchen ranges, also known as 'kitcheners' or just 'ranges', were what everyone cooked with in Victorian and Edwardian times - unless of course they were still using the older open fire cooking. Some such ranges were still in use even after electric and gas ovens became available, and a large number have survived in museums and stately homes.

Kitchen ranges were essentially cast iron, like the cooking pots used on them, although there could be steel trims. 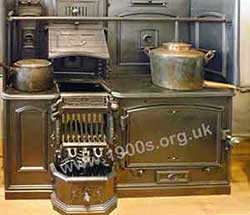 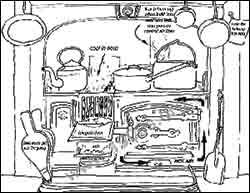 Key to parts of a kitchen range

Click/tap for a larger legible image

The drawing shows the main parts of a range suitable for a fairly large and comparatively well-off family.

Essential parts of a kitchen range

Kitchen ranges came in many shapes and sizes, suitable for different sized rooms, different sized families and different types of cooking. In spite of their differences, though, all had the same essential parts. These are shown and labelled in the sketch. Click/tap for a larger version. Most essential parts need no explanation. However a few words about the oven and fire.

The ovens, fire and fuel

The fire which heated the one or more ovens ran on coal which was the mainstay of all heating at the time. Whenever an oven was needed for cooking or baking, the fire had to be stoked up well in advance to bring the oven up to a suitable temperature. Recognising that suitable temperature required skill and experience because there were no oven thermostats. When a range was in use, it was usual to keep the fire just smouldering and then use bellows, a poker and more coal to bring it back to life when wanted. This meant that working near a kitchen range could be hot, sweaty and very uncomfortable. It was no wonder that women prefered where possible to use the smaller oven of the kitchen fire.

Emptying the ash, loading more coal onto the fire and keeping the range clean all required hard work, as described by children who had to help with it - see the boxes below.

The variety of shapes and sizes of kitchen ranges

The following photos give an idea of the wide variety of shapes and sizes of these ranges, but a word of warning: Although an essential part of all kitchen ranges was their chimneys to let the smoke from the coal fires to escape, this is not always obvious in the photos for two reasons:

Selection of kitchen ranges photographed in old houses and museums 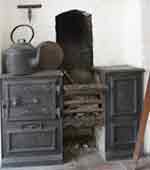 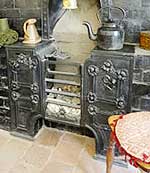 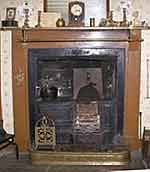 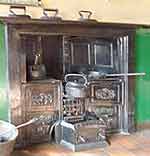 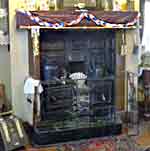 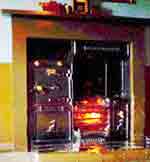 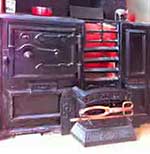 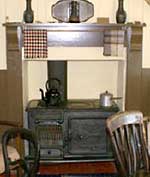 Victorian and Edwardian coal-fired kitchen ranges still existed in many old houses until the 1960s and 70s and even later.

Later range designs incorporated a 'back boiler' which provided hot water on tap. These, however, could explode if pipework became blocked - and frozen water in pipes wasn't unusual!

How a kitchen range was cleaned

As every range was a cast-iron, it was kept clean with a polish called 'black lead' which was specially for cleaning and shining cast iron. It came in a tin with the picture of a Zebra on. 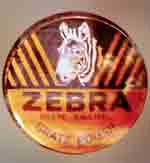 Tin of 'black lead' used for cleaning and polishing cast iron cookers. Photographed at the Cambridge and County Folk Museum.

My mother's written recollections make it clear that the outer rims of the range in her home were steel and kept bright with emery paper.

Who cleaned the kitchen range?

As an older child it was one of my daily jobs to 'black-lead' the kitchen range, once I had cleared out ashes and relayed the fire. Then I had to polish up the exposed metal with wire wool.

Why and how the steel trim was cleaned

The steel rims were the trim edges on the top plate of the range and on some other edges like doors. You may be able to spot them from the some of the above photos. Unlike the main structure which was normally black cast iron, the rims were steel. As there was no stainless steel in those days, steps had to be taken to prevent rust building up on the steel. So the rims were burnished, either with emery paper which is like very fine sandpaper, or thick wire wool, rather like a Brillo pad but without the soap.

I understand that, more generally, the insides of the ovens were kept clean by heating them to a high temperature and burning off the soot. Some insides of ovens may have been removable for cleaning purposes.