In the early 1900s when I was a child growing up on the working-class Victorian housing estate, everyone I knew cleaned their teeth with salt, which was of course mildly abrasive and was also said to kill germs. Then they rinsed with water. 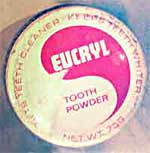 A tin of EUCRYL tooth powder. The inscription round the edge of the tin reads: 'Gets teeth cleaner - keeps teeth whiter'

Somewhat surprisingly my mother does not describe the toothbrushes of her childhood. According to the internet, they did exist, but being hogs hair set somehow in bamboo or bone, I doubt if they were within the budget of ordinary people. I suspect that merely a finger dipped in salt and rubbed round the teeth had to suffice.

I understand from a retired pharmacist that it was quite common to use twigs of wood as toothbrushes. A twig was cut to expose the soft interior and the outer bark was peeled back slightly. The exposed end was then rubbed onto the teeth, which made it divide into fibres which served as brush bristles. Willow was apparently particularly suitable, although certain other woods could also serve. Presumably the practice was only common in rural areas with easy access to suitable trees.

A length of cotton thread from the household needlework box would have served as dental floss when needed.

By the time of my own childhood in the 1940s, most adults had bad teeth which was possibly the result of this sort of poor dental care.

The treatment for toothache for ordinary people seems to have been to pull out the tooth. My father regularly told the following story, although I am not sure how true it was. He may have been joking. He said that strong thread was tied round the offending tooth with the other end tied round the handle of an open door. Then the door was slammed shut. I suspect this may have happened with children's loose milk teeth in large families where money was scarce.

Dentists certainly did exist but were probably used as a last resort because of expense. 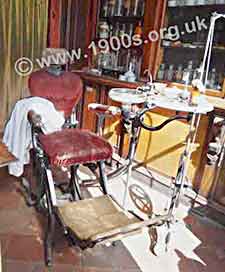 Drills in the past were treadle drills. The dentist had to keep working his foot up and down to crank the drill. The drills rotated much more slowly and seemed to vibrate the patient's head compared to the modern turbo powered drills today. They also made a more grinding sound than the modern ones which is more of a whistle. There were no diamond tipped drills like the modern dentists use. They hurt!

I shall never forget one day, as a child, when I overheard a local man saying that he cleaned his teeth with Vim. Vim was an abrasive scouring powder used for scouring pans. 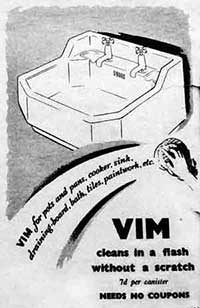 
I thought I would have a go with it - but I only learnt later that he had false teeth made of metal!

My mouth smarted for days afterwards.

By the 1930s it was not uncommon for people to be so disillusioned with caring for their teeth and with the appearance of their bad teeth that they had them all out in favour of dentures. Of course it cost them because there was no National Health Service. Some women were actually given this dubious treatment as a 21st birthday present.

Dentistry continually improved throughout the century - see dentistry in the 1940s.

Page based on the recollections and notes of the webmaster's mother (1906-2002) with additional research and editorial work by the webmaster. Photographs taken by the webmaster from old newspapers and magazines and Blists Victorian Village.