In the early years of the 20th century and before, it was common for older homes not to have baths or to have baths without a water supply. So there were public baths which enabled people to have a bath. These were also known as washhouses.

How public baths worked in the mid-late 1940s

When I went into the public baths in 1940s, I would take clean vest, pants and socks with me to change into after my bath, and take the dirty ones home with me to be washed. It was common practice in those day to change one's underwear only once a week. 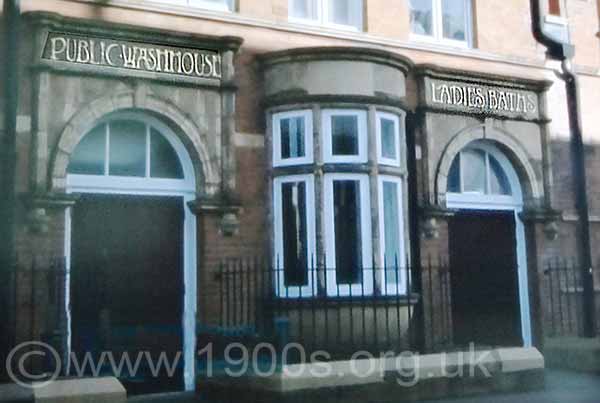 Through the main door was a pay kiosk where you could buy a first class ticket for ninepence or a second class ticket for sixpence. The tickets had a number on. The differences were that the first class cubicles were separate from the second class ones and you got two towels instead of one plus a scoop of bath salts (effectively washing soda that was supposed to reduce the scum produced by soap in hard water). The second classes were given only one towel. I paid sixpence.

Both classes were given a small piece of soap which was green and hard, and which produced very few bubbles. You could see that it had been cut from a large block. That's all there was during the war. There was no such thing as toilet soap.

This green soap was also used to wash hair as there was no shampoo available during rationing years. If you got this soap in your eyes it made you cry with the pain. It was only after rationing ended that fancy smelling soaps came back into the shops. A little later shampoo appeared, but many people continued to use ordinary soap as I did up to 1954 in the army.

The attendant would collect any small pieces of soap that were left in the cubicles. It was common knowledge that these pieces were melted down in a pan over a gas ring and re-cycled into 'new soap'. Most people took these pieces of soap home with them. My mother would melt them down, pour the liquid soap into a fairy cake tray and then use this soap to wash our clothes. The common saying at that time was "waste not want not".

Up the stairs were separate benches for the first and second classes. There you sat and waited for the number on your ticket to be called which meant that a bath was free for you.

The bath was a giant rolled top iron one that you could float in. The water was piping hot and the whole building was filled with steam and the sounds of men singing in their baths.

There were no plugs in the bath. The attendant turned a knob on the outside wall to empty it. This prevented anyone from continually running in fresh hot water. When you had finished, you called out your cubicle number and the attendant opened the tap to let out the water, and once you had gone, cleaned the bath ready for the next occupant.

When you came out afterwards into the fresh air, you felt on top of the world and about 5 lbs lighter.

Slipper Baths was carved into the stone lintel over the entrance to our public baths. I have no idea why it had that name.


How public baths worked in the late 1950s

My experience of public baths comes from the late 1950s when my wife and I lived in a caravan, during the first two years of our marriage.

As my childhood experience was that 'bath time' was a period before one went to bed, it was rather strange to go outside, perhaps in an afternoon, for a bath.

Our public baths were in a large building in Epsom. On entry, you paid your two and sixpence* to a man sitting in a kiosk. He would issue you with a numbered ticket for an empty cubicle, in much the same way that cinema tickets were dispensed. He would also pass you a rolled up towel and a small rectangular tablet of red carbolic soap.

You then entered a large vaulted hall, somewhat similar architecturally to a railway station. Throughout this hall were cubicles in which were baths. 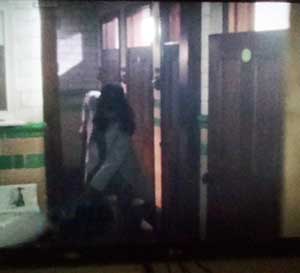 There was a quite separate ladies section, which was entered through a different door from that of the men's section.

You would enter your cubicle, shut and bolt the door, run your bath, undress and hang up your clothes, and take your bath. The water was hot and plentiful, but I seem to remember that during the war, you were only allowed 4 or 5 inches of water in the bath.

Having had your bath and dried and dressed yourself, you would leave the establishment, depositing the towel in a large basket with all the other used towels. You might well pass a 'gentleman of the road' whose tattered and slightly dirty clothes would look somewhat at variance with his pink, shiny, well washed face. I never thought about who cleaned the bath after him - or me. I don't suppose that there was any difference between my dirt, and his, although perhaps mine was just a little 'younger'. Anyway, my bath was always spotless when I used it, so there must have been a 'resident' cleaner.

*On reflection, two and sixpence seems a bit steep, so maybe I'm misremembering.


Later in the century, many people were still living in older properties, and many were bombed out from the air raids of the Second World War and living in temporary accommodation. They, too, were glad of public baths.