Since coal fires were the only form of heating in the early 1900s in working class family houses like ours, they were lit every day in winter - and burning coal produces soot. As the chimneys got blocked up with the soot. Not only would this billow dirty black smoke out into the room, there was also the serious danger of the chimney catching light.

Chimney fire and why it was dangerous

Chimney fires can take place when there is a large soot build-up on the inside walls of a chimney. Although soot is produced by burning it is, nevertheless, itself iinflammable and it can catch light if the fire in the grate is burning strongly with flames reaching up into the chimney.

When a chimney catches fire, there is no mistaking it. There is a roaring sound, and outside smoke can be seen pouring out of the top of the chimney. In some cases flames can be seen as well. There is a unique characteristic smell to the smoke.

The problem is that the flames inside the chimney draw fresh air up from the bottom which feeds the fire, and chimney fires are extremely difficult to put out.

The heat produced can damage the brickwork of the chimney, and it is for this reason that chimneys need to be kept swept.

So it was essential to have the chimney swept once or twice a year. What a business it was!

Preparations for the chimney sweep's visit

My mother would engage a chimney sweep to come as early in the day as possible, preferably before breakfast. This was because of all the clearing up that had to be done afterwards, which was no quick business. 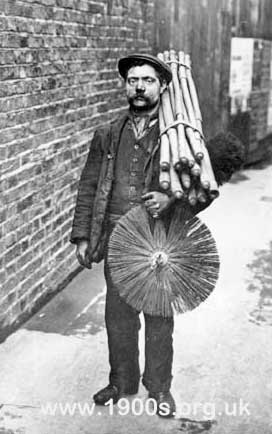 A London chimney sweep in the early 1900s.

This image exists on a number of sites on the internet, but I have been unable to locate its origin. If you hold the copyright, please contact me.

The day before the sweep was due to come, my mother would take all the china off the dresser. Then everything that was not in everyday use would be taken down, including the curtains and the pictures. All the movable furniture was put into another room or covered with dust sheets. Finally everything that could be washed was washed, ready to be put back when the room had been cleaned up after the sweep had gone.

The sweep would arrive with his brushes, rods, sacks, shovel and cloths as shown in the above photo. He would drape a large cloth with a hole in it in front of the fireplace. The hole was for the brush to go through.

The rods were rigid, unlike the superior bendable ones used since the development of plastics.

One of the brushes in the above photo is very wide indeed. Why?

Kevin Dowey of A Complete Sweep told me that in his experience the wide brush shown in the photo would have been for chimneys built during or before the Victorian era. Afterwards, from the early 1900s onwards new houses were built with narrower chimneys, requiring smaller brushes.

The process of the chimney sweeping

Our family would all go into the scullery, well out of the sweep's way, to let him get on with his work of joining his lengths of rod together to extend his brush to the right length. Then he would push the brush up and down inside the chimney. 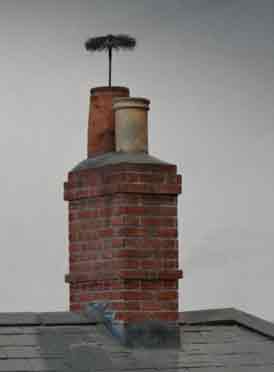 The sweep's brush showing through the top of the chimney. Photographed in Milestones Museum, Basingstoke.

A child sweeps the chimney!

I well remember my mother wanting the chimney swept in the 1950s and 60s in Glossop, Derbyshire. The main problem was that there was a bend in the chimney, so the local sweeps did not want the job. They wanted to charge so much that my mother got me do it. I had to go into the loft, remove quite a few bricks from the side of the flue, and then sweep up the chimney and then down. Afterwards I had to re-brick the flue. Not for the faint hearted! In all, it took about half a day, even before the process of cleaning up the house. I was 12 years old when this started and I continued to do it for my mother to the grand old age of 27.


The chimney sweep clears up after the chimney is swept 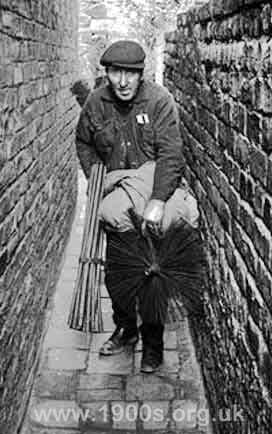 An early 1900s chimney sweep with his brushes, sacks, and cloths. The large cloth was for draping in front of the fireplace and had a hole in it for the brush to go through.

This image exists on a number of sites on the internet, but I have been unable to locate its origin. If you hold the copyright, please contact me.

There was a great deal of soot for the chimney sweep to shovel up because there was no vacuum cleaner to collect it as there would be tiday. He shovelled it into sacks, as best he could, but much of it escaped. He would always ask if we wanted soot for the garden, a general belief being that it was good for the ground. My mother's answer was usually no. It was bad enough with all the mess inside the house without him emptying sacks of soot onto the garden making a cloud of black over all the plants. He no doubt had a market elsewhere for our soot.

The family clears up after the chimney sweep has gone

After the sweep has left, to allow time for all the dust to settle, we had our breakfast in the scullery. Then began the major operation of cleaning up. First of all, my mother would sweep and brush up the loose soot from the oilcloth floor.

She would put a duster around the head of a broom, sweep the ceiling and walls and then with a bucket of soapy water wash everything that was washable including the floor.

Later in the day she would go back with a duster and put the crockery and pictures, etc back in their places. There would still be a film of dust everywhere. So the cleaning had to keep being repeated until everywhere was clean.

The frequency of needing the chimney swept

Thank goodness we only had to have the sweep once or twice a year!