Bread and other bakery wares were baked on the premises of the bakers shop and delivered directly from there.

Frequency of bakers' deliveries to the home

When I was a child in the early 1900s, bakers would come every day to deliver orders to houses.

Our baker, Breyers, had a two wheel hand cart with a wooden legs at the back to support it. 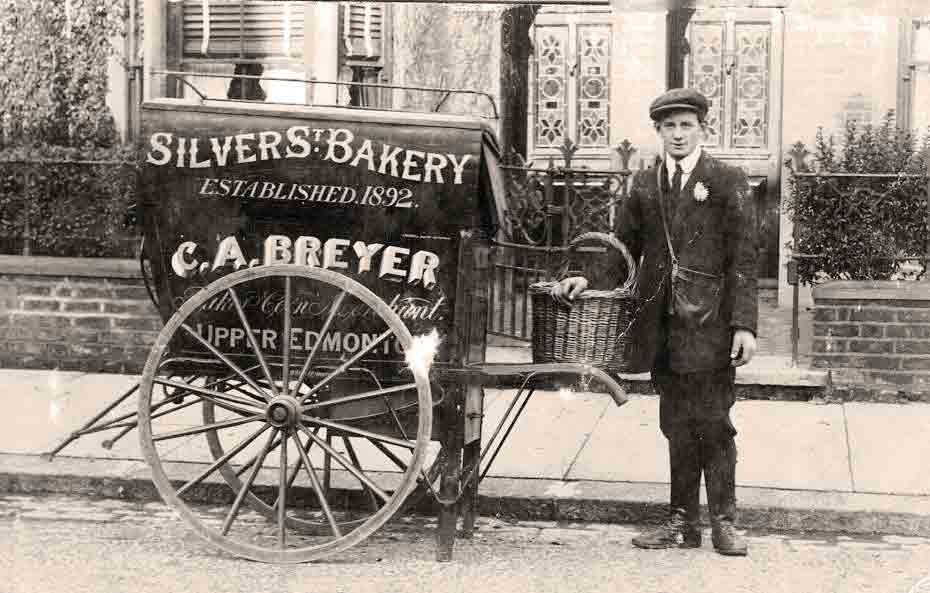 Two-wheel hand cart used by bakers to deliver their wares to houses. Photograph courtesy of the Scarff family.

The bakers' boy is George Scarff (1889-1960) delivering to Bulwer Road, Edmonton, while working for Breyers Bakery in Silver Street, Edmonton. This dates the photo to about 1903.

Deliveries were often made by young boys, possibly who had just left school at 14 and hoped to progress in the trade. Children in the family were also used, often having to do the rounds before school.

Bakers' deliveries by horse and cart

In later years, or possibly for delivering further afield, Breyers used a horse and cart.

Many a time as my mother and I waited for the bread to arrive for our 'elevenses', we would go out into the street to see how far the delivery had got, only to see the baker, many houses away, struggling to get the horse to stop eating the neighbour's privet hedge before continuing on.

My mother told me that Breyers Bakers of 123 Silver Street had a horse which was stabled in their yard in Bulwer Road. By the time I was a child in the late 1950s, this bakers had gone and the shop was a funeral director's.

The women didn't pay for their bread as they bought it. The baker carried a book in a leather pouch, and every item was entered into it. Then women then paid for a whole week on Saturdays.

During the 1914-18 war, though, things changed. So many men were called up into the forces that we had to go and get our own bread from the shop.

*Photographed by the webmaster in Milton Keynes Museum