Street merchants in London in the early 20th Century

The organ grinder was a man who worked a street organ. His organ reminded me of a tall narrow upright piano on wheels with shafts to pull it along. It had a handle at the side which the organ grinder turned to make tunes.

An organ grinder in the early 1900s, with a monkey on top. Sketch pinned to my mother's recollections.

He didn't arouse much interest with us children unless he had a monkey with him, which he sometimes did. The monkey sat on the top holding out a pot for people to put money into.

The organ grinder seldom came round the streets but stood outside public houses where he was sure of getting an audience.

Did street organs have keyboards?

I puzzled over my mother's description of the street organ being like 'an upright piano' because it made me assume a keyboard. Yet she must have been referring solely to shape because I have not been able to find a street organ with a keyboard. Do you know of one?

I suspect that the music came from a perforated roll which moved over pins as it was turned with a handle. The vibration of each pin made a sound. This would explain why my mother said that the organ grinder turned a handle.

I don't have a photo of this sort of music production (and I don't pinch them from the internet). If you have one that isn't anyone else's copyright, I would appreciate a copy for the website.

The lavender woman was probably a gypsy. She wore a shawl tied at the back of her neck in a way that would act as a bag in front of her containing the lavender, and it was not uncommon to have a baby in there too. 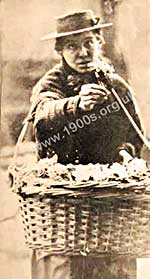 Lady selling flowers in the street in the early 1900s. From the effects of Ena Cole.

She would walk in the middle of the road to sell her lavender, but the traffic was so light and slow that it wasn't really dangerous. She would sing in a sing-song voice, "Who will buy my sweet lavender? 16 branches a penny".

People would buy her lavender to put in the chest of drawers among the bed linen. Lavender water, along with eau de cologne were the two perfumes of the day, and in hot weather people would put a drop or two on a handkerchief and mop their foreheads to refresh themselves.

The muffin man only came to residential roads on Sunday afternoons in winter at about teatime. He didn't call at houses, but we always knew when he was around because he had a large hand bell that he would ring, and he called out "Muffins ... Muffins ...". He carried his muffins on a tray, balanced on his head. The tray was lined with a wipe-clean cotton material with a varnished surface known as American Cloth. My mother never bought his muffins. For one thing, we never bought anything on a Sunday, and for another, she probably thought that bread and butter was more wholesome.

The orange seller traded from a cart drawn by a donkey. His trade was seasonal as we didn't have oranges throughout the year. His oranges were often sour, and they were small with thin skins or 'blood oranges' with red threads running through them. I well remember his street cry of, "Five oranges for a penny". Childlike, I heard it as "5 oranges 4 a penny" and I couldn't understand how it could be both 4 and 5 at the same time. It was a long time before I understood.

The ice cream man sold ice creams in cornets and wafers, and I don't know why, but all of them seemed to be Italian. The ice cream wasn't at all refined: there were always little pieces of ice in it.

The shrimp stall sold shellfish like shrimps, cockles and whelks. These were sold by the half pint or pint and were measured out for each sale. I quite liked the shrimps but the whelks made be revolt.

The wood cutter sold logs. His trade was mostly from a horse and cart or from donkeys.

The cats meat man would come round the streets with meat for dogs and cats, reputed to be horse meat. He had it in slices on a skewer. We did not see him very often as cats and dogs were mostly fed on household scraps.

One of the local allotment holders grew flowers, which he would stand in the street selling. He had a basket and would call out, "Pink pinks and white pinks. a penny a bunch".

Gypsies sold pegs which they had made themselves from the wood of the hedgerows, and they also sold lace which they had made themselves. They mostly had a baby hitched to them who of course would arouse people's sympathy. They would come round and knock at doors wanting to tell women their fortunes if they crossed their palms with silver for luck. Lots of people were frightened of them because they would put a foot in the door to stop it being closed on them. "Come on, lady", they would say to my mother, "You've got a lucky face", and then they would mutter a curse as they walked out if she refused to give them any money. Some gypsies would come round selling white heather "for luck".