What a newspaper vendor/newsvendor was

In the middle of the 20th century, newsvendors sold newspapers in the streets. They stood where large numbers of people would be passing, like at stations and did a rapid trade, probably far better than newsagents.

When I first remember them in the 1940s, they displayed the day's headlines with chalk on a blackboard.

By the 1950s, though, the headlines were displayed on large sheets of paper inside a billboard frame. These clearly came already printed from the distributors because the headlines for any one type of newspaper were the same with every newsvendor. Printed as they were, the writing was always in a font that looked like a rough handwritten script, which is a well-known technique to make what is being publicised seem stop-press and up-to-the moment. 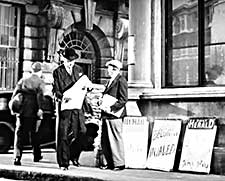 Newsvendor selling newspapers in the street, 1950s. Detail from a screen shot in an old film. 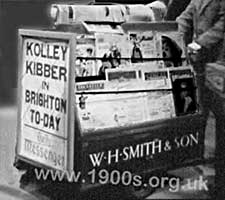 Portable newspaper trolley. Detail from a screen shot in an old film

The newspapers and magazines were kept in place with lengths of spring, so that they could easily be pulled out for customers.

Some newsvendors sold their wares from portable trolleys like the one in the photo, but I only saw these inside the big stations.

The cry of a newsvendor

Newsvendors expected the right money, but they did give change - and quite rapidly while maintaining a look-out for the next customer.