When men raised their hats to women 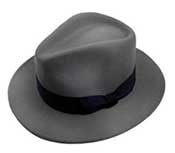 So common was this hat-wearing that it was always expected that men would have somewhere to place their hats when they came indoors. In homes, this was the hall stand, and in offices and restaurants it was a hat stand of the sort shown in the photo.

Hat stand which had hooks for hats and coats and somewhere for sticks and umbrellas.

In wealthy houses, particularly in previous years, the butler was always expected to take visitors' hats.

It was common practice at the time for men to touch these hats in a type of salute whenever they passed a woman acquaintance. This must have been a leftover from previous generations when men swept into a low bow while holding the hat in one hand. This was known as doffing the hat.

By the mid 1900s, though, doffing had degenerated into the mere token of simply touching their hats when they saw a woman they knew. Nevertheless it was still a normality as all the men seemed to do it. 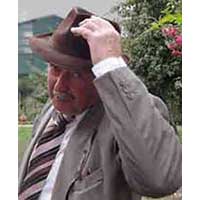 Man touching his hat to a woman in the street, a left-over from doffing the hat in previous times. Photographed at Milton Keynes 1940s weekend.

Incidentally my father would never have referred to any female he knew as a 'woman'. She was always a 'lady'.