The approach to the house

The path up to the front door was made of dark red and dark grey diamond-shaped tiles.

The front path of a similar house which still has its original Victorian tiles.

All the front doors along the roads in the estate were grained and varnished and the paintwork was kept in good repair. They all had two panels of patterned frosted glass.

These doors gave a pleasing uniformity to the road which was thanks to the owner of the estate, as the houses were rented, making the external upkeep the responsibility of the landlord.

On the inside of the door was a string, attached to the knob and draped along just below the letter box to a hook so that we children who hadn't a door key could just put our hand inside the letterbox and pull the string to open the door - a device no-one would dare to have in later years.

The sketch of the front approach to the house 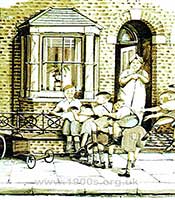 The front approach to an early 1900s terraced house. Tap/click for a larger image.

The sketch of a front approach is impressive for its detail. Note the house front with its sash window and tiled garden path, typical of the Victorian housing estates; the venetian blinds at the typically shaped bay window, the aspidistra in the window, the typical working clothes of a long overall and headscarf worn by the housewife, the long socks worn by the boys and the old trolley used as a toy. The game that the boys are playing is described on a separate page. The sketch opens up on tap/click and is worth examining in detail.

The front garden was very small with an evergreen shrub round the window, a creeper that reached up to the bedroom window and a privet hedge that faced the road behind garden railsings. Keeping the hedge in good shape was one of the jobs that my father allowed me to take over when I was able to manage the shears.

Just inside the front door was the hall, known as the passage. There was a rack there to hang coats and a small umbrella stand. There was also a very nice hall lantern hanging from the ceiling.