Sketch of the kitchen layout

Plan of the kitchen of a fairly typical 1940s suburban house, based on recollections of 9 Brook Avenue, Edgware, showing positions of the boiler, table and chairs, mangle, pantry/larder, build-in cupboard, sink, cooker and kitchen units.

Many similar suburban houses had smaller kitchens with a cupboard instead of a walk-in pantry/larder and no space for a table.

See the 1940s house for how this kitchen plan fits into the plan of the other rooms on the ground floor of the house.

The size of the kitchen

The estate where our family lived was fortunate in that the kitchens were larger than those in most semi-detached houses of the time. They were large enough for a walk-in pantry or larder, albeit a small one and for a table. This meant that we could eat in our kitchen. Most other families I knew on other estates had to eat in one of the other rooms which either meant heating two rooms in winter or, more likely, being cold in one of them.

Apart from the table and walk-in pantry, though, our kitchen was much like the kitchen in any other 1930s-built suburban house in the 1940s.

The comfort of the kitchen

The kitchen was a pleasant place to be and was where we tended spend our time. In this it was similar to the Victorian-style kitchens, but note that there was no separate scullery in the 1940s house. The kitchen and scullery were merged into one.

The kitchen was pleasantly light because the walls and window sills were tiled with white shiny ceramic tiles, like in the bathroom - the fashion at the time - and it was warm because of the coal-fired boiler which was on in all but the most excessive of heat waves to provide hot water.

Our floor was patterned lino, but other kitchens often had the black and white lino tiles like the bathroom.

To the left of the door was an alcove housing the boiler which was fired with a special type of coal called Phurnacite. The ceiling was low there and took the top part of the boiler chimney.

Two fairly large pipes went between the ceiling and the boiler. One carried water down from the cold water tank in the loft and the other carried the hot water, heated in the boiler, upstairs to the hot tank, which was in the airing cupboard in the bathroom. I suppose these pipes were rather dominantly ugly by today's standards, but they never struck me that way. My father would put his hand on the hot pipe to test whether the water was hot enough for a bath.

My mother cleared away the ashes every morning, and went outside to the coal bunker to get the boiler fuel for re-stoking the boiler.

There is more about the boiler in the heating section of the website. The cooker has its own page.

Further round against that wall, under some wall-shelves was the mangle which was essentially like the mangle in any Victorian or Edwardian home, although smaller. It was rolled out for use every week.

Eventually, sometime in the 1950s, it was discarded and our first fridge went in its place. The function of the discarded mangle was a spin dryer which went under the draining board.

My mother always regretted getting rid of her mangle. She said, with some justification that a mangle did half of the ironing because the rollers flattened and smoothed the wet washing. She never did have a washing machine, in spite of cajoling. I suppose she was brought up to believe that a woman's work was in the home and that labour-saving devices were in some way decadent.

Under the side window was a table with its three chairs. It was fortunate that there were only the three of us in the family as a fourth chair would have been so close to the oven as to close the walkway through the kitchen.

The chairs were dark cane ones, although they were replaced by light wood years later. The table was unvarnished wood, known as 'white-wood' which my mother scrubbed almost daily, just as her mother had done in her own childhood in the early 1900s. I understood that the table had been made in therapeutic work by WW1 soldiers recuperating at Edmonton Military Hospital, but other households would have had something similar.

Years later my mother eventually agreed, after much persuasion, to the top of this whitewood table being covered with plastic laminate, known then as Formica.

The back door to the garden and its lock 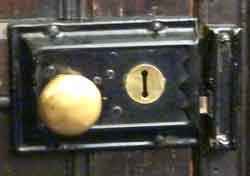 Door handle and lock from the kitchen to outside

On the wall opposite the door to the hall was the back door to the garden. It had a single glazed top window in it and was made of thin wood with thicker pieces of wood across it. Ours was painted magnolia.

It locked with a large heavy lock operated with a large key which always stayed in the lock. It would have been simplicity itself for a burglar to break the glass, turn the key and gain entry - but fortunately that never happened.