Why it was common for old terraced houses to have mice

A problem with the long rows of Victorian-style terraces was that it was so easy for mice to move from one to another of the houses. It only took one household to be not particularly careful with food for mice to be attracted in.

Once in, they had the whole run of the terrace block. When I was a child living on the Edmonton Huxley Estate in the early 1900s, there were of course no fridges to lock away food, so I suppose that it was understandable that some people left odd bits of food lying around rather than going out into the garden to the dustbin or meat safe.

When mice were most active

Sometimes we saw the odd mouse run across the room, but it was at night while we children were in bed that the mice were most active. It was quite common to hear them scampering around.

My mother told us that once when she was washing the floor in daytime with the usual bucket of soapy water and a scrubbing brush, she was called away by a knock at the door. When she got back she felt something in the bucket, and thought, "What's this?". When she pulled it out, she found that it was a drowned mouse. This must have been particularly unpleasant for her because she would have been using her bare hands as there were no rubber gloves.

What was bad about mice in the home

Mice were dirty creatures. They left their droppings around and the nibbled at food leaving it contaminated and messy. What was more, they were frightening because they could move so quickly. You would have to see a mouse scampering across a room to believe how quickly they could move.

How we trapped and disposed of mice 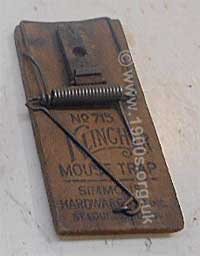 When we knew that there was a mouse in the house, my father would set mousetraps bated with cheese. The cheese of course was Cheddar because there was nothing else, and it accordingly earned the nickname of 'mousetrap cheese'.

The design of the mousetraps doesn't seem to have changed over the years - and it was very effective. I was pleased, though, that I never had to empty the traps and dispose of the dead mice. I think my father wrapped the dead mice in newspaper and put them in the dustbin.

Incidentally I never saw a mouse-hole of the sort shown in cartoons. The mice just seemed to find cracks that we didn't know we had.