Creative solutions to shortages in and after World War Two

Beautifully iced wedding cakes that weren't what they seemed

In general, people on the British home front during World War Two were accepting and creative in the face of rationing and shortages.

A well known example of cunning creativity, which I knew about as a child, but never actually saw, was the cardboard covers decorated with plaster and painted to look like professionally iced wedding cakes.

The reality was very different. Apparently exquisitely decorated cakes turned out to be small mediocre ones hiding under the decorated cardboard covers. 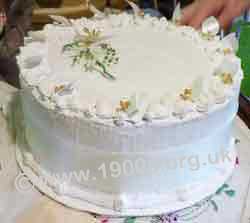 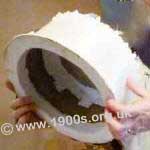 The cover lifted, showing that it is hollow

All photographed in Bushey Lincolnsfields Centre 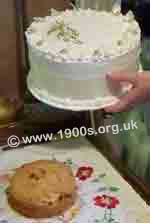 These cardboard covers were passed around from one wedding to another.

Houseplants that were not what they seemed

Because in early 1940s wartime Britain, all the country's resources went into the war effort, buying new houseplants was almost impossible.

Of course some houseplants from before the war were well tended and continued to brighten up homes throughout the war and cuttings were given away to friends and neighbours. However, in general it, was make do and be creative with what was available. 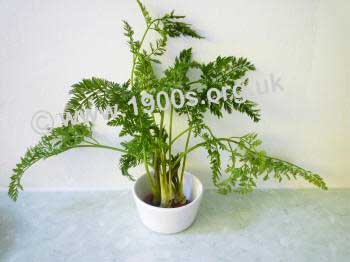 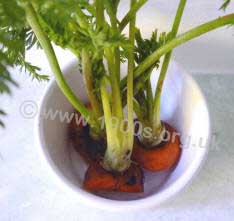 The carrot top bases in a dish of water 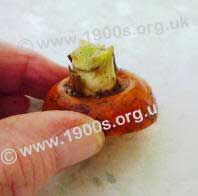 
Carrot top houseplants were a good solution. I well remember them from my own childhood home and other homes that I visited. Carrots grew in the UK and were off-ration. They were a staple in British homes. It was not wasteful to use them for carrot top houseplants because the tops were left-over waste, once the carrots had been peeled and cooked for eating.

I grew a carrot top houseplant specially for photographing for this page. Have a look at it in the first photo. If I hadn't told you, would you have guessed what it was?

To prepare a carrot top for growing as a houseplant, just cut off the leaves and most of the carrot as shown in the photograph.

Carrot tops had other uses: They were fed to the rabbits that many people kept in their back gardens for free and off-ration meat.

Also carrot top foliage could be chopped up and put into salads.

Chrysanthemums that were not what they seemed 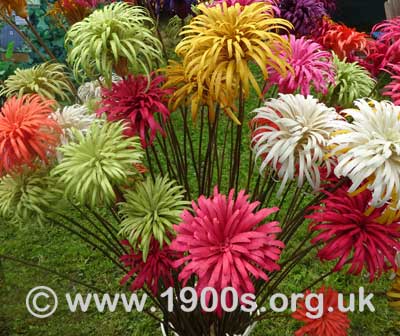 
In early 1940s wartime Britain, every scrap of land went into food production and people's back gardens were largely cleared of flowering plants in order to grow vegetables. So vases of cut flowers were rare.

There were of course imitation flowers from before the war, made from wax or silk, but few families had ever had any and fewer still had kept them. They soon got dirty and the wax ones tended to melt.

Gypsies' woodland crafts to the rescue

It was gypsies who came to the rescue with their imitation chrysanthemums.

Gypsies were adapt at woodland crafts. They made all sorts of things from wood and plants that grew in the countryside, which were of course free for the taking. Their gypsy clothes pegs are well known, and were the only type of clothes peg that I remember from my 1940s childhood. Howeverypsies' abilities to produce imitation chrysanthemums is less well-known.

Gypsies made their chrysanthemums from wood shavings, dye and wooden sticks. To my young eyes, the results looked very effective.

The starting point was a stick of wood shaved into a cylinder about three inches long and half to three quarters of an inch thick. Then slivers were shaved off towards one end. The photo shows the idea. 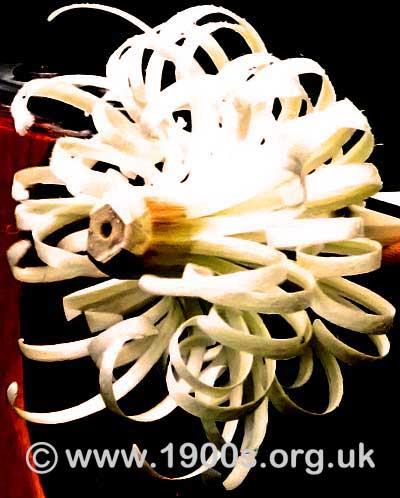 Gypsy chrysanthemums being made, showing the wood shavings and the solid holding base.

The wood had to be fresh, so that the slivers would automatically curl as they were shaved off, and they had to be more or less the same width and length. Care had to be taken that they stopped just short of the base of the cylinder so keeping the end as a solid holding block. This was more easily said than done. The gypsies were craftsmen.

A hole was bored into the base to take the stick that would act as the stem.

Then the blocks of shavings had to be dyed. In the top photo, the imitation chrysanthemums are more brashly coloured than those that I knew as a child in wartime 1940s. (I took the photo at an event where enthusiasts were demonstrating old crafts.) The colours of the gypsies' chrysanthemums were much more natural-looking. Their dyes were probably plant based.

How gypsies sold their woodland crafts

The gypsies would come round the streets, knocking on doors to sell their woodland crafts including their imitation chrysanthemums.

I was told that the gypsies were not averse to putting a foot in a door to prevent the housewife from shutting them out, but I don't remember this happening to my mother. I do remember though that the gypsies tried to sell sprigs of heather "for luck" and that women were afraid of them and tended to buy what they didn't want so that the gypsies would go away.

The photo is a recent one, of an old door that had been made to look like oak back in the 1940s. It probably won't look very effective to you, but to me as a very young child, it was very impressive indeed. 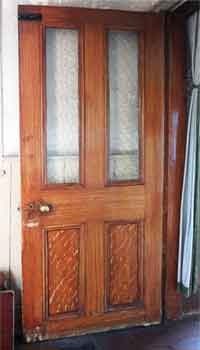 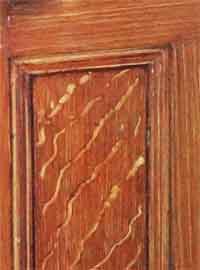 Detail of the combed and fingered varnish

I remember that my aunt wanted a door that looked quality. So what did she do? She first varnished it with oak coloured varnish. Then she ran over it with a comb to simulate the grain of quality wood. Finally, to make it look like oak, she ran her finger across it in places to simulate the marks across oak grain. I thought it looked wonderful! But of course I was only a young child.

My bedside cabinet as a child wouldn't have deceived anyone. It looked like and was a vegetable box from the greengrocer. But it served its purpose and I was content with it. I include it here just to emphasise the shortage of proper custom made furniture.

Everyone called these boxes 'orange boxes', although I doubt if my wartime one had ever contained oranges. 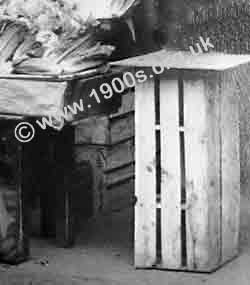 A typical upturned vegetable box, generally known as an 'orange box', used by greengrocers in the 1940s. It probably served as many a piece of furniture in the shortages of wartime Britain. One was as my bedside cabinet. 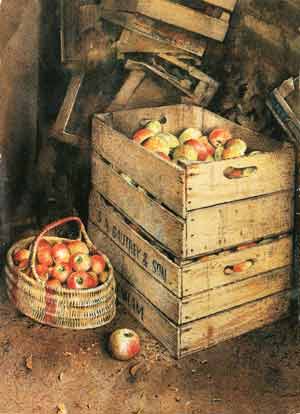 A typical vegetable box, generally known as an 'orange box', containing apples. From an old scrapbook.

All the vegetables arrived at greengrocers in these boxes and were often displayed in them too. There were no plastic crates.

My orange box bedside cabinet consisted of coarsely cut unvarnished white-wood slats, hammered together with a few nails, like the one in the pictures. It all too easily gave people splinters, so my mother covered the top with an embroidered cloth.