How I came to see the coronation procession

The coronation of Queen Elizabeth II took place on 2 June 1953. My father's work happened to have its offices along the route of the coronation procession, so my mother, father and I were invited to visit the offices for a window view. This meant travelling into London on the London Underground to Piccadilly Circus.

In the middle of the 20th century, news vendors stood outside stations to sell their newspapers, and the major news of the day was always handwritten (probably duplicated handwritten) in large letters on a bill board beside them. On this occasion, the breaking news was that Mount Everest had been climbed! I can remember that bill board now, as if it were yesterday!

It is probably difficult for anyone younger to understand quite how memorable and significant the scaling of Everest was. At that time the peak of Everest was one of the last great unknowns. It was that awe-inspiring and almost magical place that mankind had never managed to conquer and its significance was rather like the first moon landing in 1969.

It has frequently been said that whereas the scaling of Everest was an additional honour for Britain and the Queen on her coronation, far, far more would have been made of it, if it had been on any other day. As it was, the coronation took up the vast majority of news space.

The coronation procession is not something that I remember well, probably because the windows of the offices were so high up that the view was very foreshortened. From that height I couldn't even get much of the atmosphere of the crowds lining the rod.

What surprises me in retrospect is that the train home didn't seem to be crowded. Neither did the train going. It is possible that my father's firm laid on something such that we arrived early and left after the crowds had gone. I don't remember.

Cheering the Queen in the pouring rain

My mother was a staunch Royalist, and we didn't have a television. So up to London we went to see the Coronation procession for real. To be sure of a good view on the day, we travelled up the evening before and waited all night on cushions and picnic chairs. It was one of the wettest Junes on record, and although we wore macs and had umbrellas, we got soaked. It was said that about three million people lined the streets to watch the procession, but I don't know how many were there all night.

Memorabilia of the coronation

I did, though, enjoy the various celebratory events that year. They were particularly welcome in view of the years of shortages and austerity. Below are some memorabilia that I collected. 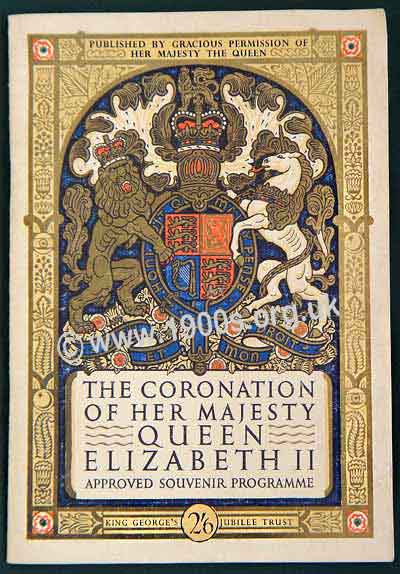 Official souvenir programme for the coronation of Queen Elizabeth II. 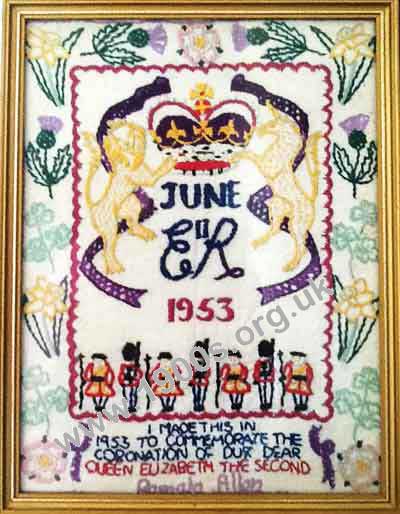 Embroidery celebrating the coronation. Photo courtesy of Pamela Southin who embroidered it when she was a child. 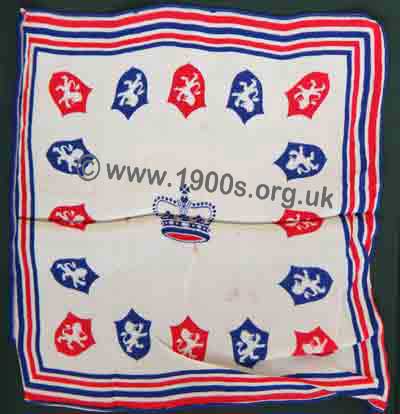 Souvenir scarf of the coronation of Queen Elizabeth II. 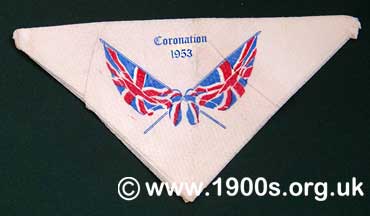 I also had a small mirror backed with a photo of the Queen. As you moved it, the Queen seemed to turn her head. It was the first time I had seen this technology and I was fascinated by it. It worked because the picture was on a ridged base. These ridges were small, but one photo had been printed on one edge of all the ridges and the other photo on the other edge. So as you tilted the mirror, you saw different ridge edges.

I have also been given an image of a coronation street party in Argyle Road, Edmonton, said to be of one of the Georges, but it isn't clear which one. Can you help?