The postillion (postilion) rider of a horse-drawn vehicle

Definition of a postillion

According to The Free online Dictionary:

A postilion (or postillion) is someone who rides the nearside horse of a pair in order to guide the horses pulling a carriage (especially a carriage without a coachman).

For some time I was puzzled at my mother's description of the postilion in a funeral procession, because she said that they looked like jockeys.

Many photos of Victorian and Edwardian funeral processions show coach or carriage drivers wearing top hats. However my mother was correct - see the pictures below. The wearers of the top hats, the coachmen, guided the horses from seats high up at the front of the carriage whereas the postillions who look like jockeys guided from a seat actually on the horses.

In a showcase event there may be a coachmen and a postillion, but a postillian can guide where there is no coachman.

Old newspaper drawing showing a postillion. He is dressed like a jockey and guides the coach while sitting on a one of the horses that is pulling the coach.

This drawing shows a procession which is clearly for show purposes, and it suggests that there are more horses out of the picture, to the right. If so, there would have to be at least one more postillion, as they always guided the front horse.

An old book confirms that postillions were in funeral processions:

The coffin, half hidden among flowers, was in a hearse drawn by six black horses richly caparisoned* in purple and gold. On one of the front horses rode a postillion ....

* 'caparisoned' refers to a horse without a rider.

from Gypsies of Britain: an introduction to their history (1944)

Postillians all wore the same type of clothes rather like the uniform of the job.

... a postillion wearing a tight fitting black tunic and purple knee-breeches and a black jockey cap.

As previously stated, the clothes were like those of a jockey.

However his boots were different and unique to his type of work. Because it could be dangerous if one or both his legs got caught between the two horses, the boots were reinforced inside with iron. They were made of black leather like most boots of the time, but the foot part was larger with a loose iron lining. There was an internal iron ring a short way down from the top of the boots to add further protection. 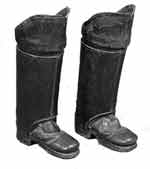