Spanish Flu and the Coronavirus pandemic 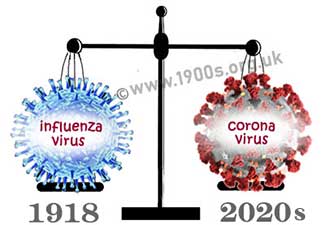 Which was worse? The 1918 influenza pandemic, known as Spansh Flu, or the Coronavirus pandemic with its variants like the Delta variant and Omicron? It is too early to know precisely how many deaths coronavirus is going to cause. As I write in early January 2022, inventions in London are 1 in 10 and the deaths worldwide are approaching five and a half million. In contrast, deaths from the 1918 influenza pandemic are said to be above 50 million which makes the 1918 pandemic look far worse than the 1920s one.

Why the 1918 influenza pandemic was so lethal

The 1918 flu epidemic was 'such a shocker' because so many of those who perished were fit and healthy people under 40. It has been suggested that was because in 1918 there had been little flu in Europe for 30 years [which meant that younger people had had no chance to build flu immunity].

Were the Spanish Flu deaths largely hidden from the public?

I think there is more to be said about the numbers dying of the 1918 flu pandemic:

For some years, I had suspected that the Spanish Flu data had been kept form the British public at the time. You see, my mother's detailed account of life in the early 20th century - the basis for this website - never mentioned the flu epidemic or Spanish Flu. She was well-acquainted with death, as is shown by her detailed description of her baby sister’s death in 1911. She also described funerals more generally, funeral costs and how people let one another know about deaths. Furthermore, although the flu was thought to have been brought to Britain by the returning soldiers from the WW1 trenches and she even wrote about the World War One home front, she never mentioned the flu deaths either in conversation or in her copious notes.

To add to this absence of data, my own well-documented research into family history showed no causes of death as the influenza pandemic. Although people must have died in 1918/19 in the UK, such deaths are curiously few in my own records.

Suppression of deaths due to Spanish Flu

It is a historical fact that the 1918 flu pandemic was so serious that, to avoid panic, UK newspapers were not allowed to report it. Probably the same was true for other countries. I also understand that causes of death on death certificates were unreliable, either because doctors declined to mention the flu, or the deaths were due to secondary infections which, without antibiotics, were lethal.

In this suppression of the true state of affairs, there is a clear parallel with the current Coronavirus pandemic. We know for a fact that a certain country which shall be nameless here, although everyone will recognise it, did cover up the emergence of this new virus until the excessive numbers of deaths made that impossible.

Why the 1918 Flu pandemic is called Spanish Flu

The covering up of the seriousness of the 1918 Spanish Flu leads to the reasons for its name.

I have read that Spain was one of the few countries that didn't prevent publication about the flu at the time. So people got their information from Spain - hence the name Spanish Flu.

Please, if you know of a confirmed case of death in the UK from the 1918 influenza pandemic, do let me know.