How to choose the best decision from several alternatives - a decision that you will not regret. This page considers the most common decision-making strategies and then focusses on the one which has guided my life for many years. 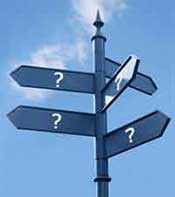 What do we mean by the best decision?

In order to make what would be the best decision for an individual, bearing in mind the their situation, the alternatives available to them and that none of us can foresee the future, what is needed is a decision-making strategy - even if that is not what you call it.

Before using any strategy, you must of course think through and identify the various alternatives and their associated pros, cons and uncertainties. Doing this as a lists on paper helps to focus the mind. Keep going back to it as new points come to you. So never make an important decision quickly.

Now let's look at the most common alternatives for decision-making strategies.

It is easy to think of doing nothing as being unthinking or lazy, but it need not be like that. But if you add one word so that the strategy becomes Do Nothing YET, it can change things dramatically.

The decision-maker may need to wait for something else to happen, e.g.

You will be able to think of many other examples where it is sensible to put off a decision until you have more information.

That of course does not prevent you from using a decision-making strategy to decide what to do in each of the various eventualities.

First of all, let's get out of the way what is a poor but very common way of making a decision - i.e. choosing the alternative that is most likely to produce a positive outcome provided that nothing untoward happens.

The problem with this approach is that things all too often, things do go seriously wrong because of unforeseen events and bad luck. These may make a mockery of what was expected to be a good outcome, and much may be lost as a result. In a worst-case scenario, it can lead to ruin - and newspapers are not short of examples. Of course there are exceptions, but they are not common.

So making a decision on the basis of 'maximising anticipated benefit' is not a reliable decision-making strategy.

Choice 3 - Minimise regret, a better way to make a decision

This is the strategy for decision-making that has served me really well over the years and it does not rely on maximising anticipated benefit, but on minimising something else. That something else is 'regret'. One of the worst things to live with is regret. Think about it. How many times have you wished that you could go back in time to change something because you wish that you had behaved differently? Kept your temper? Visited an elderly relative? Donated to a good cause? The list is probably almost endless.

The strategy requires you to working out what losses could occur after making each of the various alternative decisions and then choosing the one which would produce the most readily borne losses if things were to go wrong, i.e. losses that you wouldn't regret too much. A loss could be in terms of time, money, health, guilt, relationships, morality, etc.

The strategy is known as 'minimising regret' or just 'least regret'. Note the 'minimising'. It is not a strategy for eliminating regret. That would be absurd. It would mean for example, that you would never leave home in case you were run over by a car.

A gambler's advice on minimising regret

A quote which is valid in all decision-making in everyday life:

Never play with resources that you can't afford to lose.

If you use the strategy, it is up to you to decide on what your greatest regret or regrets could be out of the various possibilities of things going wrong. Only then can you make the decision which minimises those regrets.

Different people facing identical alternatives may come to different yet equally valid decisions because what is least regret for one of them is not what is least regret for another. Different people in different circumstances can more easily bear different types of regret, but there is always regret somewhere in decision making. What matters is minimising it, as the following examples show.

However if she was so well-off that she could afford to lose the £500 if the luxury item turned out to be unsatisfactory and that she would still be able to afford another £500 to feed her children, the least regret strategy would suggest that she should go ahead with the purchase rather than miss out on something she wanted.

Suppose for example that a man was asked to contribute an exhibit for an exhibition and was led to believe that it would be a centrepiece there. This made him want to visit the exhibition to see his exhibit in place. However the exhibition was several hours journey away, so he pondered whether the visit would it be worth the outlay of time. He realised that if he did not go, he would always regret it by wondering what he had missed. So, using the least regret strategy, he decided to make the journey.

It turned out that his exhibit was not a centrepiece and that the exhibition was such a disappointment that he had completely wasted an entire day. Yet he was nevertheless pleased with his decision to go because, being retired, a wasted day was not really much of a loss, and he no longer had to live with the regret of wondering how his exhibit would have looked.

If he had still been in employment, however, a possible wasted day might have been his major regret, so his best decision would have been not to go. He then might have made another decision like asking for a photograph.

Suppose for example that a woman had to decide whether or not to visit an elderly relative. She was busy at the time and she didn't really want to go anyway, although she knew that the visit would mean a lot to the relative. Using the least regret strategy her decision was to visit because she knew that the guilt of not going would be the worse of the alternative. So guilt was what she preferred to minimise. Another person might of course have decided differently in order to minimise a different regret that took priority.

Consider the example of the decision of whether or not to do something criminal. If things were to go wrong and the crime was discovered, some of the likely regrets could be personal humiliation, embarrassment to the family, a fine, a prison sentence and of course the lack of the proceeds from the crime. Each of these regrets would have different priorities for different people. A hardened criminal might have no fear of another term in prison with his mates and would find no humiliation in it. His greatest regret if his crime were discovered would be missing out on the chances of ill-gotten gains. So, using the least regret strategy, his decision would be to go ahead with the crime.

Fortunately, most of us would regard the regret of guilt and humiliation as too difficult to bear, so to minimise these, we would decide to stay within the law. In fact most of us make this decision unconsciously without thinking about it.

How often have you heard someone say, "I wish I knew what was the right decision"?

In fact there is no 'right' decision. The least regret strategy is one of least regret, not no regret. Regret cannot always be completely eliminated and any decision probably involvse some regret.

A common example is the decision of whether to place a feeble elderly relative in a nursing home or let her continue unable to manage in her own home or bring her into one's own home. There are disadvantages to all the alternatives.

In such circumstances people can waste a lot of time looking for the right decision when it would be preferable to look for the least bad one.

The origins of the least regret decision-making strategy

It is time to explain where the Least Regret strategy comes from. I first saw it many years ago in a professional journal on Game Theory where it concerned making decisions about the best strategies for making moves in a game. It immediately made a lot of sense to me. So I tried it for my own more general decision-making in my daily life, and, as I have said, it has served me well.

In fact 'least regret' has become a catchphrase in our family. If one of us says that they are going to do something, they only have to add 'least regret' and everyone else knows what they mean.

Limitations of the strategy

For most practical purposes, the minimising regret strategy is helpful and applicable. The exception is when the decision-maker is excessively timid with no good reason for being so. Should a child be kept back from school, for example, because he or she might catch a cold there? Or should someone needing surgery decline it because they might die on the operating table? These things might happen, and if they did, the regret could be overwhelming - but it is extremely unlikely, and most of us would agree that the child should not be kept back from school and that the surgery should go ahead. If you are concerned about whether you are being unnecessarily fearful about a decision, you should discuss your fears with knowledgeable people before making up your mind.

Although I am confident about the value of the Least Regret decision-making strategy, how others use it must be their own responsibility.