The Festival of Britain was a big event held in the summer of 1951, supposedly to give everyone a feeling of recovery after the Second World War and to promote the country's contribution to science, technology, industrial design, architecture and the arts.

There were events all over the UK, but as I was living in north London, my mother took me to the Festival's centrepiece on the South Bank of the Thames. The building was known as the Festival Hall and was built specially for the Festival. 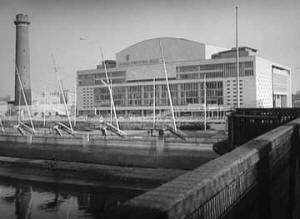 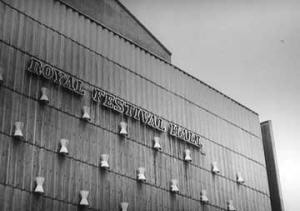 Festival Hall which housed the Festival of Britain. Screenshots from an old film.

I was twelve years old at the time and apart from the crowds only two things about the Festival Exhibition stuck in my mind:

There were demonstrations of telecommunications. Probably there was little new about them. Telegrams, for example, were in common use before the war, but to me, as a child, the opportunity to send one free from the exhibition was an exciting novelty. It also provided my own permanent souvenir of the Festival. 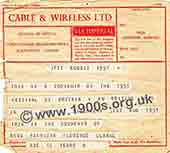 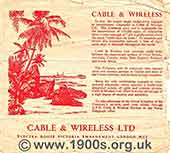 Telegram souvenir of the Festival of Britain from 'Cable and Wireless'.
Tap/click for larger legible images

The demonstration showed two small screens side by side, one black and white and the other ostensibly colour. They were probably about 10 inches wide but I can't be sure. They were showing the same film which was probably a propaganda film for the Festival, although again I can't be sure. What I can be sure of is that I looked at them both quite closely and was hard pressed to tell the difference between them! Once I knew what I was looking for, I could detect a slight colour tinge in one of them, but it was certainly not at all obvious.

Consequently I decided that colour television would never catch on. How wrong could I have been! The development and improvement of those early televisions has gone from strength to strength.

When the Royal Festival Hall was opened in 1951 as part of the Festival of Britain, it was heated and cooled by a heat pump extracting heat from the River Thames. The heat pump compressor was powered by two Spitfire engines – the same ones that had performed so valiantly in aircraft a decade before.

Souvenirs and memorabilia of the Festival of Britain

Everyone who had something to sell seemed to seize the opportunity of placing a Festival of Britain logo on their goods. There were also Festival of Britain coins and stamps. A search on Google images or Ebay will give a good indication of the range.

My mother took me and my next elder brother to see the Festival of Britain. I say see because the cost of entry was beyond my mother's means so we saw it from the other side of the Thames. Nevertheless we could say that we had been there. As an eight year old I was actually rather more fascinated by the trams which ran alongside the Thames and where, at 'the hole in the road', they turned to continue their route underground.