Greengrocers and fruiterers in 1940s wartime and afterwards

It was quite usual to have a sign or symbol outside the shop indicating to the passing public what the shopkeeper's trade was. At our greengrocers, Waltons, it was a large bunch of plaster bananas hanging at maybe 10 to 15 feet above the pavement - probably a relic from pre-war times. I had been told that these were bananas but of course I hadn't ever seen a real banana at that time. When I eventually did see one, I was very, very disappointed to find that it was only about 5 or 6 inches long rather than the two or three foot plaster version.

What greengrocers sold in the 1940s

All I ever remember my mother buying in our one-and-only greengrocers were potatoes, although I suppose she would have bought other seasonal vegetables like carrots and cabbages and homegrown fruit in season. Potatoes were not rationed, so were the mainstay of the British diet and they grew well in Britain's climate without having to be imported. In fact, very little was imported, although there was the occasional shipment of bananas - see the Luxuries and Treats page. Now, as an adult, my heart goes out to the courageous merchant seamen who brought them in through seas infested with German submarines.

There always seemed to be a queue of women at the door of the greengrocers which was kept permanently open for them, whatever the weather. So the shop was always draughty and in winter it was cold. It was also very scruffy because the potatoes, carrots and other vegetables came straight out of the ground unwashed and unbagged in rough wooden crates. Layers of dust seemed to cover everywhere.

The potatoes and any other earthy vegetables were weighed out for each customer by women in dusty green overalls, using the 'balance' type of scales with heavy weights on one side and a large dusty scoop on the other. The potatoes, etc were then tipped into brown paper bags, and carried away by customers in their string bags. Cane shopping baskets were the mainstay for most shopping, but the use of string bags for unwashed vegetables kept the dirt out of the shopping baskets. 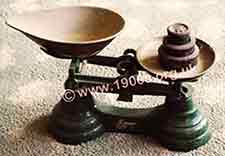 Greengrocer scales.
Note the pointed pan, to make it easier to tip into a bag and the heavy weights as customers suitable for weighing out potatoes.

The women worked at an extremely fast pace, never stopping to chat. This could have been because of the long queues or just that that was their personalities.

Photograph of an old greengrocers

The following photo was given to the website with the comment that it was from the 1940s as a celebration of Empire Day. Yet it looks far too luxurious for wartime, or even the period of austerity in the years after the war. Also I don't ever remember any formal recognition of Empire Day, although my mother, writing of her schooldays around 1912 remembered the celebrations clearly. Furthermore the placard advertising apples from Canada is very much in the style of Victorian and Edwardian times, and there is a profusion of bananas and the enlargement below shows a customer at the back of the shop wearing a 1920s/30s style hat. 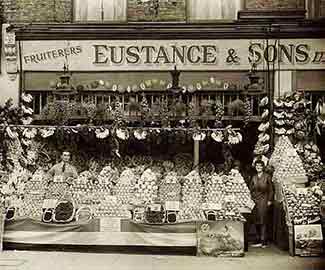 Greengrocers: a special display for the Empire Window Dressing Competition. The shop was in Finsbury Park, north London and belonged to Roy Eustance. The photo is courtesy of his relative Viv Nunn.

On the other hand, the prices marked on the fruit and vegetables, assuming that they are /lb, ie per pound weight, and the dress warn by the woman assistant do seem to fit better with a 1940s/50s date. Also the Canadian apples placard could have been kept packed away for years and the 1920s/30s hat could have been saved from that time as there were few new clothes in wartime due to rationing.

What do you think? Either way, it is a very nice photo.

Below is an enlargement of the display showing the propensity of apples and pears, ie homegrown produce with prices marked in the old money of shillings and pence. Only the bananas at the back and the grapes are imported. 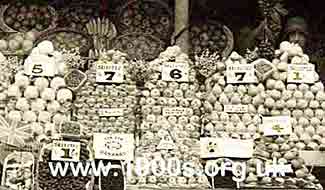 Tap/click for a larger imager to see the price labels more clearly.

Placard showing the purpose of the display. Detail from the above photo

Placard advertising Canadian apples. Detail from the above photo