You could always recognize a barber's shop, because there was a red and white pole outside, about 18 inches high and 4 inches across. Barbers cut men's hair and did shaving. 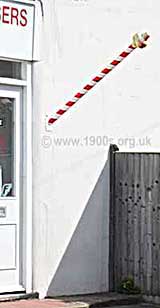 Why barbers had a pole

A teacher told me that striped poles were common outside barbers' shops because the levels of literacy were so low that clear symbols were needed to encourage custom.

A man to be shaved would first have a towel put over his shoulders and under his chin. Then the barber would work up a lather with a small brush and soap, apply the lather with the brush and use an open razor to scrape it off, along with the beard stubble. Finally the man would have a warm towel put round his face which was supposed to help the skin feel better.

The importance of a good barber

A good barber was well sought after because being able to trust oneself to someone with an open razor was obviously important.

Barber did more than cut hair. Barbers shops sold hair tonic (Anzora and Anzora Viola), Brylcream, Silvikrin, combs, hair and shaving brushes etc., and (not on display) condoms. These became more reliable than the old rubber ones with the development of latex, so barbers did a good trade in them.

Women often cut their husbands' hair. It was all a matter of cost - but couldn't you tell!

It was usual practice to cut children's hair at home. Often a pudding basin was put on their heads to guide the scissors. No layers were cut in.

Our local barber in Edmonton was owned by the Rawlinson family.

I have been unable to find a barber named Rawlinson in Silver Street in the 1911 census. So he probably arrived later.